Peter Karp\Sue Foley - Beyond the Crossroads 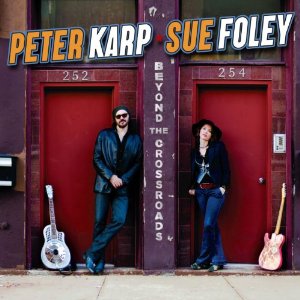 Maybe it’s just me, but the newest release, Beyond the Crossroads by Peter Karp and Sue Foley gets more interesting with each subsequent listen.  A common thread runs through each song, tying them all together in a neat little musical present for the listener.  This thread is the personal relationship between the artists themselves.  A follow up to their prior album, He Said, She Said, based on their back-and-forth emails and long distance calls, these songs delve a bit further into their hearts and souls, revealing a refreshing positivity.

The harmonies on this album are very nice.  Sue Foley has a sultry and slightly raspy voice that can really belt out some lyrics when she needs to.  To hear what I am talking about, check out the song “Analyze’n Blues”.  What really puts the icing on the cake for this track is Karp throwing down with his National Steel ResoRocket slide. This one ranks high on the ‘cool meter’.  I love this song.

Karp and Foley playfully dance around several different genres while keeping the album as a whole really bluesy.  Take the song, “At the Same Time”, for example.  As Karp and Foley alternate vocals with Karp on slide, a fantastic horn section provided by the Swingadelic Horns spice up this slow-tempo Louisiana creole flavored duet.  It’s Beale Street meeting Bourbon Street.  For those who appreciate bluegrass, and have a very short attention span, check out the very fast paced instrumental, ‘Plank Spank’.  Although it clocks in at just less than two minutes in length, Karp and Foley play their hearts out and have now earned a spot on my list of performers I want to catch live in concert.

Posted by PhillyCheezeBlues at 10:54 AM