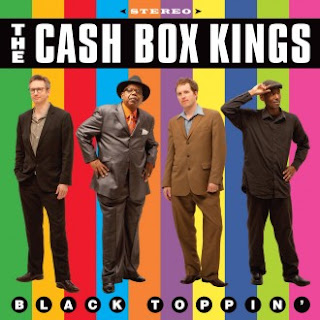 Black Toppin’ by Chicago bluesters, The Cash Box Kings will have listeners waxing nostalgic in no time.  Their sixth release continues the tradition of infusing their music with the spirit and sound of the Forties and Fifties.   Producer/front man, Joe Nosek on harmonica, alternates lead vocals with Oscar Wilson while Joel Paterson conquers the lead guitar and Kenny “Beedy Eyes” Smith masters the drums.

Title track, ‘Black Toppin’’ a catchy little ditty about forbidden love and sneaking around is a pleasurable treat.  Written and sung by Wilson, this one sounds steeped in old school Blues.  Also dunked in the old school Blues tank, is their spot-on cover of Willie Dixon’s ‘Too Late’, (originally recorded by Little Walter), and the traditional, ‘Walking Blues’.  Both of these sung by Wilson as well.  He has a great voice for the Blues, and it delivers authenticity to the songs.

Barrelhouse Chuck, 2013 nominee for the Pinetop Perkins Piano Player of the Year Award, makes an appearance on four tracks.  Of those, the spotlight really shines on him in  ‘Money, Marbles, and Chalk’ and one quickly finds out why he was nominated.    Bundling Barrelhouse Chuck on organ, with Nosek on harp, gives ‘My Tinai’ a cool retry Sixties Doors sound.

When the band gets going on songs like Lou Reed’s ‘Run Run Run’, one can feel the energy pulsating through the speakers.  I might have to go out on a limb and say I like this version better.  The band is so tight and the Paterson squeezes every note out of his guitar with precision.  This is my favorite track on the album.

For those fans of the classic Blues, this one comes highly recommended.

Posted by PhillyCheezeBlues at 1:41 PM