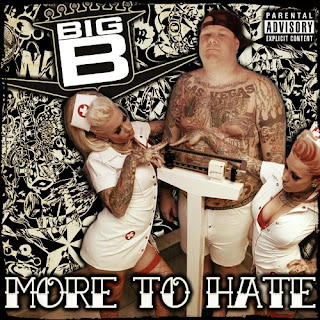 One rarely thinks of Vegas when the topic of rap music arises.  That may be changing really soon.  Big B,  the Las Vegas rapper has released a very solid album called More to Hate.  Each song seemed to have its own individual imprint, displaying a diversity of styles.  The title track “More to Hate” emits that old school nineties rap essence, and eases the listener in comfortably.  “White Trash Life”, the single, could easily be confused as a Mighty Mighty Bosstones song, with its ska beat, and gravelly vocals.  Being a Bosstones fan myself, I enjoyed this track immensely.  Danny Diablo offers up assistance with the track, “Put’em Up”, a southern fried selection which reminded me a bit of Kid Rock.  “Put’em up, get ‘em up, stick ’em up,  what? Your hands motherfucker! Your hands motherfucker!”, the hook, is still moshing around the diameter of my brain.

Big B really connects with the common person though songs “Counting Pennies”, “Pass the Jager”, and “Real as they Come”.   “Pass the Jager”, featuring Dirtball, another ska influenced song, makes an excellent party anthem.

The catchiest of the tracks on More to Hate, may just be “Looky Looky”, layering the hook over a beat that sounded like something the B-52’s could have cooked up.   I also favored the track “On the Road”,  which mixes one part drinking song, with stories from the road, with a friendly nod to ICP and the Juggalos.

With the help of  the Kottonmouth Kings, Big B has transformed Men Without Hats’ one hit wonder into something sure to put a grin on Cheech and Chong’s faces.  In “We Can Smoke”, Big B sings, “We can smoke if we want to…”   to the tune of “The Safety Dance”.   Tech N9ne is featured on the following track, “Million Miles”, a love ballad about being away from home.

Don’t let the name fool you, More to Hate will give you more to like.

Posted by PhillyCheezeBlues at 11:01 PM