Flobots - Fight With Tools - From the Archives #6 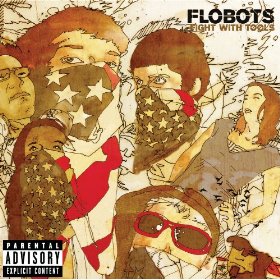 I was captivated upon my first listen of Fight With Tools by Flobots,   Flobots, an alternative  hip hop band hailing from Denver, are similar in style to bands, Cake and 311.  But Flobots,  flaunting a seemingly higher IQ, are a bit more funky and a lot more political.  Jamie Laurie, aka Jonny 5, the founder and constant member of the band, chooses to write and rap about current events and his political views rather than the topics usually covered by hip hop artists.

Jesse Walker lays down some really kick-ass bass lines to cuts, “Combat” and title track, “Fight With Tools”.   Violist, Mackenzie Roberts along with trumpeter, Joe Ferrone add a unique flair to this album, enriching the musicality of tracks such as “Mayday”, one of my personal favorites of this collection, and the in-your-face, world leader-challenging “Same Thing”.  “Handlebars” standing out as the downloadable favorite on iTunes, showcases Laurie’s skills as a writer/rapper.  Different than the rest, “Never Had It”  kicks off with a sultry beginning, and resonates with a vibe of sixties pop.  But if you really want to take something catchy to the dance floor, take a listen to “The Rhythm Method”.  Flobots all come together on this song like none other on Fight With Tools.

I found the song “Anne Braden” very lyrically powerful and musically hypnotic.  Flobots take a stab against racism with this track, a tribute to a woman who received honors for her contributions to civil liberties.

Each track is individually unique, yet one can sense a common thread running through them all.  The album is very well constructed, and I have to say, I am impressed.

Posted by PhillyCheezeBlues at 7:09 PM