Johnny Rawls “ Ace of Spades ” From the Archives #9 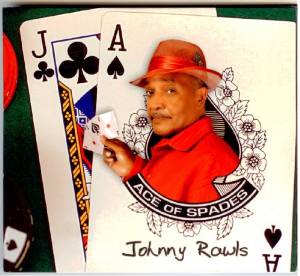 With Ace of Spades, Mississippi blues artist Johnny Rawls brings the big city blues club to the listener with a very polished production and smooth as silk vocals.  His style reminds me a lot of Sam and Dave, as it reflects a lot of that Memphis sound from the mid to late Sixties. The recording of  Ace of Spades was split between two different studios, Sonic Ranch in Tornillo, TX, and Soul Tree Studios in Helena, MT.  Rawls uses a separate set of musicians at each location.

There are three songs recorded at Sonic Ranch that really jump out and grab me.  The first being the title track, “Ace of Spades”.  This is such a fun song, and I really like the way Rawls includes the horn section.  The second, being “Gasoline on the Fire”, a really funky selection from the viewpoint of a fellow whose lady is a bit on the wild side.  Lastly, “My Broken Heart”, which features a powerful horn arrangement with a taste of keyboards to spice up Rawls soulful vocals as he sings about his heart being torn apart.

Some very wonderful cuts were recorded at Soul Tree as well.  Rawls makes an excellent point, as he  preaches about how self indulgent we have all become trying to live the “American Dream”.  The lyrics are poignantly honest  as he sings ‘as you drive on by in your limousine, he [the homeless man] can’t see into your American dream.’.   It makes one think about priorities.   “Can’t Win For Losing”, another song I think quite a few folks can identify with,  considering the current condition of the economy,  is a slower cut with a slight zydeco flavoring.  When I hear the hook, ‘I can’t win for losing, I lose every time.  Every time I get a nickel, somebody want a dime‘, I say ‘Amen brother!’.

This is a solid CD.  It’s enjoyable from beginning to end, and worth checking out.