The Janeys - Get Down With the Blues 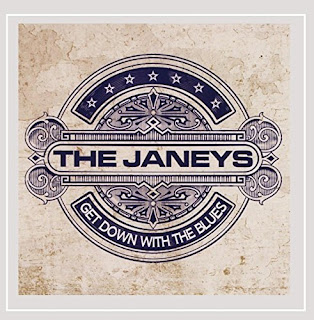 It has always been a pleasurable treat when Billylee Janey and Bryce Janey join forces to play as The Janeys. With Get Down With the Blues, their third studio release playing together, they continue a family tradition of producing outstanding blues.  Accompanying the talented father/son team is bassist Dan ‘DJ’ Johnson, and drummer Eric Douglas.  Also joining the crew on four tracks with his Hammond organ is Tommy ‘T-Bone’ Giblin.

Get Down With the Blues opens strong and closes even stronger as the Janeys cover Jimi Hendrix’s “Beginnings” on track one, and serving up a very cool rendition of ‘Third Stone From the Sun’ on the last track.  I love the dual electric guitar sound riding atop the percussionary bus driven by Douglas on “Beginnings”. Billylee and Bryce trade licks back and forth as if fighting it out in a psychedelic guitar-centric ‘Thunderdome’.
I consider “Third Stone From the Sun”, the desert at the end of the meal.  I just want to close my eyes and listen when it comes on.  Johnson and Douglas keep the trance-friendly rhythm going while the Janeys totally let loose on their guitars.  This one is the crème de la crème.

The Janeys offers up quite a soulful rendition of “It’s Not My Cross to Bear” from the Allman Brothers Band’s self-titled album.  I like the way it witfully ends with the closing riff from “Whipping Post”, also from that same Allman Brothers album. Giblin and his Hammond, gives this one authenticity.   Still on the subject of covers, I have to smile when I hear “Mind Bender”, the classic ditty from Stillwater about a mind-bending guitar whose father was a Gibson and mother was a Fender (that’s why they call him Mind Bender).  The Janeys also nail down “The Good Love”, a track from Johnny Winter’s Second Winter album.  Bryce’s deep vocals fit this one very well.

There’s some really nice originals on the album too.  I really like the slightly unsettling track, “When the Devil Comes Out to Play”.  It has a retro Seventies Blues Rock vibe and just the right amount of fuzz.  “The Rose” is another one that made me perk up and take notice.  Marinated in a big bucket of Southern Rock, I hear a definite Allman Brothers influence running through this one.

The Janeys scored big with the appropriately titled, Get Down With the Blues. This collection of Blues Rock is a sweet blend of deep covers and interesting originals.
Posted by PhillyCheezeBlues at 4:43 PM