Spin Doctors - If the River Was Whiskey 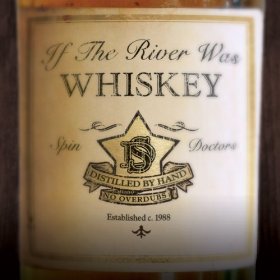 The original members of the Spin Doctors have all reunited; bringing vocalist Chris Barron, guitarist Eric Schenkman, bassist Mark White, and drummer Aaron Comes all back together again to record their sixth studio release, If the River Was Whiskey. This ten song album is their first in eight years, and interestingly leans a lot more toward the Blues side of the scale.  It’s fun to hear the Spin Doctors take on the Blues full force.  If it weren’t for Barron’s recognizable voice, I wouldn’t have guessed this was the Spin Doctors.

I really like the twangy guitar riff Schenkman dishes out on “Some Other Man”, a song about broken hearts and lost love.  This could very well be mistaken as the missing track from Bob Dylan’s Tempest album. It has a very folky blues feel to it.  I also enjoyed the cleverly written, “So Bad”.  Schenkman puts an eerie spin on this slow devilish twelve bar blues song about the horrifying Mr. Satan.
Surprised and impressed is how I feel each time I hear “Scotch and Water Blues” .  Schenkman steps out in the spotlight and lets it rip on this electric blues favorite, while Comes pounds the hell out of his drums.  It doesn’t get much better than this.  And while on the subject of spirits, I better mention “If the River Was Whiskey”, a catchy fast paced rockabilly selection with the hook, ‘if the river was whiskey, you’d have no trouble drowning me’. I like this one quite a bit too.

Posted by PhillyCheezeBlues at 10:00 PM