Tommy Castro and the Painkillers - The Devil You Know 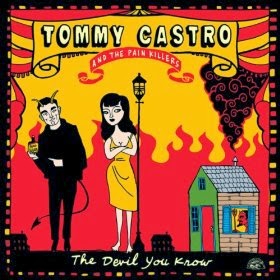 It’s almost impossible to not get down and do some foot-tapping when I hear “When I Cross the Mississippi”.  Tab Benoit and Mark Karan both jump in with guitars. Tab joins along on vocals as well.  I really identify with this song, and the way it invokes a longing to return to wherever we call home.  When I hear him sing the lyrics, ‘That river runs so strong.  The river clears my brain.  When I cross the Mississippi, I got muddy water in my vein.’, I get the urge to hop in my car, drive down to Memphis, and catch some live music.

I love the slow and swampy infectious groove on the title track, “The Devil You Know”.  Between that groove, Castro’s killer guitar licks and the soulful organ contributions from Pace, this makes for a strong opening track.  Things get even better when Joe Bonamassa joins in on a cover of Savoy Brown’s “I’m Tired”.  Bonamassa handles most of the guitar on this as Castro’s slightly gravely vocals add an extra layer of ‘cool’ to the song.  The jam between the two towards the end of the song is nice as well.  Mark Karan also sits in on another outstanding cover, Wet Willie’s “Keep on Smilin’”.  I might have to even say I like this version a smidge better than the original.  I can’t help but be in a better mood when I hear it.

Joining Castro as he wails on his guitar, in the fast paced original, “Medicine Woman”, is Samantha Fish.  She’s sexy and sultry.  It’s always a pleasure to hear her sing.  It’s also a pleasure to hear the Holmes Brothers who provide spiritually uplifting backing vocals on “Two Steps Forward”, which has an extra boost of richness provided by harmonica master, Magic Dick.

One of my favorites, “Center of Attention”, is an energetically charged powerhouse of a song with pounding rhythmic drums, splendid guitar riffs, and fierce vocals.  Revolving around a drama queen who just has to be the center of attention, this song definitely ends up on my heavy rotation list.

The Devil You Know is thirteen tracks of soulful positively charged Blues music. It is a fantastic listen from beginning to end.
Posted by PhillyCheezeBlues at 2:39 PM