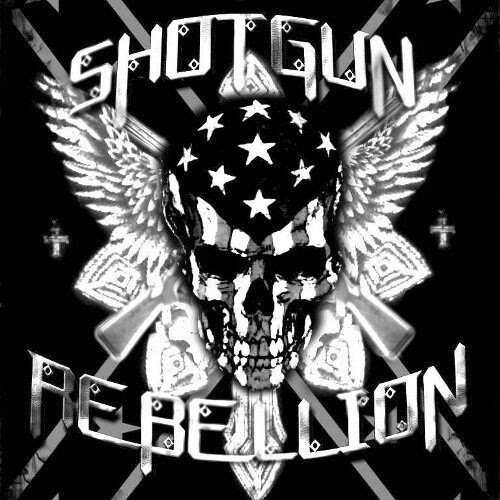 
This self-produced, self-titled, thirteen track album by Shotgun Rebellion fell into my awareness quite unexpectedly and I have to say, it pretty much bowled me over.  These guys elevate Southern Rock to a whole new level, by introducing fearsome guitar licks, emphatic beats, powerful vocals and wild-west imagery along with an arsenal of all-original songs.  Rooted in Oklahoma, Shotgun Rebellion features vocalist Rick Davis, bassist Jon Parr, drummer Johnni Walker, and to top things off, guitarist extraordinaire Randy “The Arsonist” Cooper formerly of Texas Hippie Coalition.

“Lost My Way”, gets the album kick-started with a combination of vocals and guitar which reminds me a lot of Black Rain era Ozzy with Zakk Wylde, sans the British accent.  Davis and Cooper knock this one out of the ballpark.  The album only gets better.  I really like the infectious groove on “Squeeze My Shotgun”.  This double entendre titled party anthem takes me back a couple of decades to Guns N’ Roses (original lineup).  The song is pure no-nonsense rock with smile-inducing guitar play and crashing cymbals.  Another track that seems to emit that GNR vibe is “Pain and Misery”.  I can’t help but think of Black Oak Arkansas when I hear Davis’s voice on this song, and its successor “Train of Pain”.  Davis’s singing and style reminds me a lot of Jim “Dandy” Mangrum from BOA.   While on the subject of Jim Dandy,  I want to mention another song I really like,   “Just as Good a Day to Die”, a heady little ballad that falls right into the BOA wheelhouse. It’s as if it was written as a follow-up to the song “Lord Have Mercy on My Soul”.

I detect a bit of Charlie Daniels inspiration when I listen to “Devils Home Brew” as Davis spins the tale of a moonshining witch.  The cool factor runs high on this eerie tale which tells us ‘there is nothing you can do once you get a taste of the Devil’s home brew’.

Right up there on top of my list of favorite tracks are “Roll On” and “BadmansGUN”.  “Roll On”, plainly put, is one hell of a good song. Walker and Parr set up a really cool hallway of rhythm for Davis and Cooper to maneuver their way through. Then there is old-West themed ballad, “BadmansGUN”, which is sung from the view point of a man dying from a gunshot wound, and interjected with little bits of dialog and effects.  Sitting in on piano is Michael Miers, a friend of the band. One of the more interesting moments captured in the song is when everything gets quiet, and we hear just the piano, an acoustic guitar, and Johnni Walker softly whistling.

Shotgun Rebellion not only captures my attention at the beginning, but it holds on to it until the end.  This album is quite impressive, and I hope we will be hearing a lot more from these guys in the future.  I believe we will.

*  Special note :  Wes Wallace (also formerly of Texas Hippie Coalition) was added to the band full time about a month ago. So although he didn't appear on the album, he will be touring with them.

Posted by PhillyCheezeBlues at 2:40 PM