Warbringer - War Without End : From the Archives #14 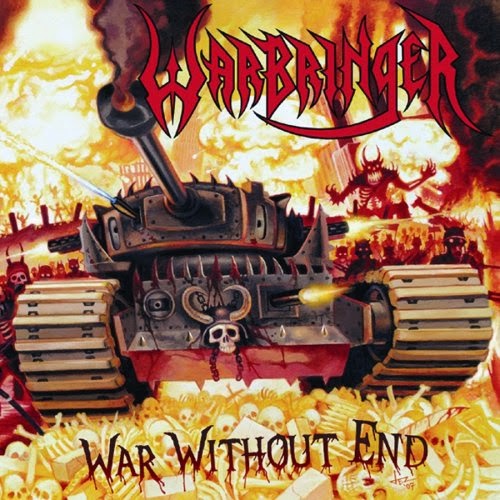 Coming face to face with the realization of just how close to midnight the hands on the doomsday clock just are, Warbringer relays the message matter-of-factly via headlines of their own on their newer CD, War Without End.   Impressively, guitarists Adam Carroll and John Laux aggressively create their wall of sound for lead vocalist, John Kevill to perch himself on top of and scream.  Drummer, Ryan Bates is no slacker either.  He plays with ferocious intent, pounding out crafted beats with near-perfect precision.

War Without End is extreme thrash at its finest.  I latched on quickly to cuts, “Total War“, “Systematic Genocide“, and “Hell on Earth”.   The cut I favor above the rest is “Beneath the Waves” for the melodic interludes and animalistic growls from Kevill.

Guitars screamed in “Instruments of Torture”.  This is a very dark and very cool cut.  It would fit in nicely on a soundtrack the SAW film series, with such lyrics as “Cries of torment echo from the grave.  Satan laughs, your soul cannot be saved.”

The best concept song award goes to “Shoot to Kill”.  Zombies are rising from the grave, and the orders are “Fire at will. Yeah, Shoot to Kill”.  Thrash and zombies, I love the combination.  It works great.

For the thrash fans, this CD is very much recommended.

* written 01/17/10  and originally appeared on FoundryMusic.com

Posted by PhillyCheezeBlues at 7:19 PM