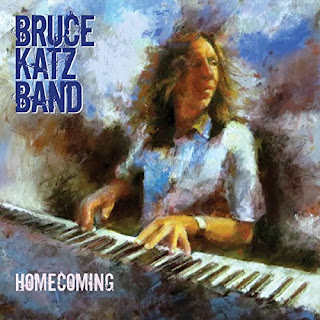 Just give the Bruce Katz Band’s Homecoming a listen and you will find out rather quickly why he has been nominated three times for the "Pinetop Perkins Piano Player of the Year” Blues Music Award.  Legendary keyboardist Katz, is backed by guitarist/vocalist Chris Vitarello and drummer Ralph Rosen.  Special guests on this album include John Hammond, Jimmy Bennett, Marty Ballou, Peter Bennett and Randy Ciarlante. Homecoming is symbolic of Katz’s return to work on his own music, after several years of backing the likes of Gregg Allman and Delbert McClinton.  The music selected for this thirteen track album, is steeped heavily in Blues and Jazz, then delivered via feel-good jams.

Katz brings a new life to Lightnin’ Hopkins’ “Santa Fe Blues” as a piano performance piece with a slightly quicker tempo than the original.  With Blues Hall of Famer John Hammond at the helm on vocals, this song has an amazingly authentic bluesy sound.  From the acclaimed Alexis P Suter Band, guitarist Jimmy Bennett and bassist Peter Bennett drop by to jam on Elmore James’ “Wild About You Baby”.  J. Bennett not only rips it up on guitar, but takes the vocal lead on this great cover as well.

Joining Katz and gang again, J. Bennett sings and plays guitar on one of his own originals “It’s a Bad Time”.  It’s so fun to listen him and Katz playfully dance their instrumentation around in this Coltrane-influenced jam. I love the abundance of jazzy instrumentals Katz scatters about the album, such as “No Brainer”, “The Czar”, and my favorite “Amelia”, which has a vibe that reminds me of Page McConnell from Phish.

It’s so cool how an album such as Homecoming can exude such positive energy and maintain that output from start to finish.  Honestly, I could listen to this album all day long and not get tired of it at all.

Posted by PhillyCheezeBlues at 5:48 PM