Alejandra O'Leary and the Champions of the West - Heartspace Timepiece 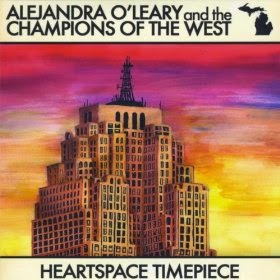 
It just takes one listen to Heartspace Timepiece from Alejandra O’Leary and the Champions of the West, to acknowledge it as a beautiful masterpiece.  This indie rock band based in Michigan and North Carolina, craft and perform amazingly lush pop music with outstanding vocals and deep lyrics.

The spacy and futuristic, “Now Now” reminds me a lot of synth-pop band, Missing Persons.  Echo-filled vocals, and attention-grabbing guitar licks make this one a great track to open up with.  O’leary’s angelic voice flawlessly flows through the folksy “Skin to Skin”, with the softness of Juliana Hatfield. “New Low” is the song most likely to get stuck in my head.  This deliciously poppy song ironically tells the tale of an unraveling relationship.

The Champions of the West definitely come from a space heavily influenced by bands like the Strokes. This adds a nice substantial and meaty texture to tracks “Positive Drag”, “Talk Me Down”, and personal favorite, “Mine That Groove”.

O’Leary nails this one down, as there are no skip-overs on this album.  Each of the nine songs on Heartspace Timepiece is definitely a ‘keeper’.

Posted by PhillyCheezeBlues at 11:31 AM