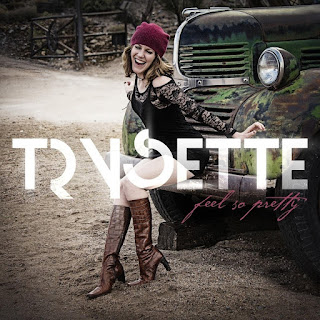 Feel So Pretty, the fifth studio album by Australian singer/songwriter/pianist Trysette is quite a lovely album indeed.  It is melodically rich and beautifully performed.  A seasoned and most talented group of musicians was enlisted for this studio recording in Los Angeles.  Guitarist Randy Ray Mitchell (Donna Summer, Warren Zevon, Billy Bob Thornton), organist Bob Malone (John Fogerty), and drummer Mike Baird (Eddie Money, Rick Springfield, Joe Cocker, Journey) gel together so good as the backing band, as they mix elements of pop and country and rock creating a laid-back and feel-good sound.

Trysette sings about an unhealthy infatuation in “Under My Skin”, a song that is smooth as glass with catchy hooks.  This song appears again at the end of the album in a more intimate and stripped down presentation, with Trysette at the piano, Marty Rifkin on pedal steel and backing vocalist Karen Nash.   I really like title track “Feel So Pretty”. It has this really cool Julianna Hatfield vibe and is such a delight to hear. Of the dozen tracks on Feel So Pretty, all are original with the exception of one song; Snow Patrol’s 2006 hit single “Chasing Cars”. The string accompaniment from Sophie Delerue and Candy Girard are the perfect touch to this mesmerizing cover which showcases Trysette’s beautiful vocals.

Feel So Pretty is music for the soul on a rainy day.  Heartfelt from beginning to end, this enchanting album is a true gem.

Posted by PhillyCheezeBlues at 2:55 PM