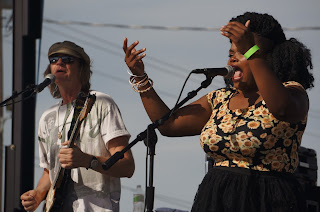 Erickson kicked things off with one of my favorite songs from his Sky Train Galaxy album, “Mojo in Memphis”.  Soon afterwards the band broke out the funk and tore into a groovy performance of Rufus and Chaka Kahn’s “Tell Me Something Good”.  Strong’s vocals were powerful and perfect.  Strong belted out more sweet and soulful vocals as the band doled out a rousing cover of Buddy Mile’s “Them Changes”.  I loved the bluesy spin they put on the Bob Marley classic “No Woman No Cry”, as well as the clever mash-up with the Five Stairsteps’ 1970 top-ten hit “O-o-h Child”.  Delbert McClinton’s “Standing on Shaky Ground” was a real treat, highlighted by an outstanding performance by Hall on his seven string bass, and Giblin on organ.  Stevie Wonder’s “Higher Ground” immediately followed, keeping the groove afloat and the audience on cloud nine.


Watching these musicians in action makes me proud to live in a community which not only has a wealth of great talent, but through appreciation of live music, is able to retain these talented artists we get so much enjoyment from.


All Photos by Phillip Smith


Posted by PhillyCheezeBlues at 3:13 PM