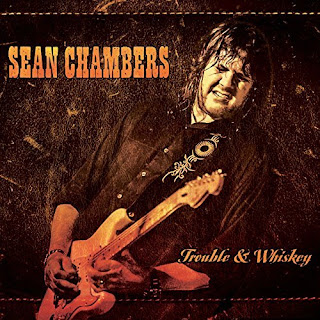 
From 1998 to 2003, Sean Chambers toured as lead guitarist and band leader for the legendary bluesman Hubert Sumlin. During that time, Chambers was named by Guitarist Magazine as “One of the Top 50 blues guitarists of the last century”.  His sixth release, Trouble & Whisky is fully-loaded with raw electrified blues.  Backing Chambers is drummer Kris Schnebelen(Trampled Under Foot) , bassist Todd Cook, and Michael Hensley on B3 and piano.

Right out of the gate, the driving rhythm and searing blues in “I Need Your Lovin” sets the tone for the whole album.  Chambers’ slide guitar on “Bottle Keeps Staring at Me” gets so red hot, it scorches.  The infectious hook sets in and does not let go.  With Schnebelen nailing down a thunderous performance on drums, Chambers takes on Rory Gallagher’s “Bullfrog Blues” with unbridled force.  I love the way Chambers’ guitar wails with emotion in his rendition of s B.B. King’s “Be Careful with a Fool”.  It’s plumb terrific. Special guest, John Ginty, one of my favorite keyboardists today, lays down some groovy keys on his B3 in the soulful jamboree of “Travelin’ North”.  It melts like butter with Cook’s funky bassline.  The song soars skyward as Chambers takes control of this wonderful instrumental.

Trouble & Whiskey is about as good as it gets.  It is indeed a powerful album.

Posted by PhillyCheezeBlues at 12:15 PM