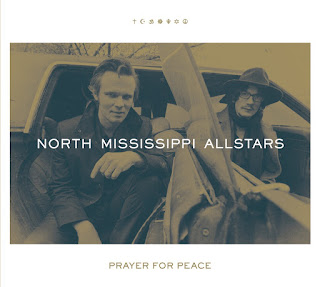 North Mississippi Allstars has been one of my favorite bands since they rolled out Shake Hands With Shorty in the year 2000.   With their latest album Prayer For Peace, the three-time Grammy Nominated Dickinson brothers, Luther and Cody bring another fine batch of blues songs to the table.  Recorded in multiple studios across the U.S., while on their 2016 tour, this self-produced album features quite the notable guest list, which includes Oteil Burbridge, Graeme Lesh, Sharisse Norman, Danielle Nicole, Dominic Davis, and Shardé Thomas.

The driving trance beat and the beckoning of a “Prayer For Peace” warmly lures the listener into the album.  The accompaniment by guest musician, fife-master Shardé Thomas (daughter of Otha Turner) is the cherry on top of this mantra for world peace.  A delicious bombardment of greasy slide guitar from Luther grabs my full attention on the riveting hill country blues of “Run Red Rooster”.  They tackle “Stealin’”, first recorded by the Memphis Jug Band in 1928 (and also covered by the Grateful Dead), in a raw stripped-down Stones fashion.  Taking on another couple of cues from The Dead, they tear into an intoxicating version of “Deep Ellum” and break out a plumb terrific jam on “Bid You Goodnight”.

Wonderfully psychedelic licks woven into clusters of fat electric riffs breathe new life into the hill-country blues of R.L. Burnside’s “Birds Without a Feather”.  Another Burnside foot-stomper they take on is the fabulous “Miss Maybelle”.  They also pay a nice homage to the great Mississippi Fred McDowell, injecting a fortified soulful groove into “You Got to Move” which segues very nicely into a smoking rendition of “61 Highway”.


The Dickinsons valiantly do their part to make sure the blues are not forgotten by keeping the music alive in their performances.  Their taste in music is extraordinary as is their interpretations of it.  Prayer For Peace continues their tradition.

Posted by PhillyCheezeBlues at 3:34 PM