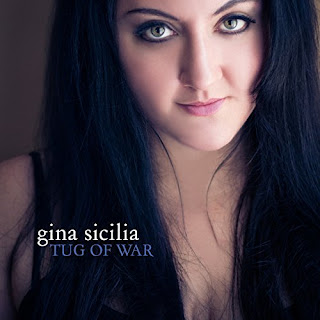 Gina Sicilia continues to captivate listeners with her beautiful voice and lovely compositions in her seventh release, Tug of War.  Produced by Grammy-winning producer Glenn Barratt and Grammy-nominated producer Dave Darling, the album consists of six new tracks, along with the five tracks from her 2016 EP release, Sunset Avenue.

Guest guitarist Zach Zunis (Janiva Magness) dishes out a heaping dose of electrifying licks on “I Don’t Want to be in Love”.  Strong and confident, Siclia’s vocals on “Damaging Me” are reminiscent of those of Linda Ronstadt’s in the height of her career.  Her cover of Patsy Cline’s “He Called Me Baby” is a magnificent and fresh homage to the 1976 Candi Staton version. The rich sounds of Joel Bryant’s B3 slather the song with soul.  Sicilia gives an outstanding performance filled with emotion as she sings The Beatles’ 1963 hit “All My Loving”.


Drawing inspiration for the album title and original tracks, from her own personal struggles and experiences, this wonderfully gifted vocalist artfully encapsulates the Blues into her music and into this album, Tug of War.

Here's a quick link to check out my review of Gina Sicilia's  Sunset Avenue EP ->
https://phillycheezeblues.blogspot.com/2016/12/gina-sicilia-sunset-avenue.html

Posted by PhillyCheezeBlues at 3:41 PM