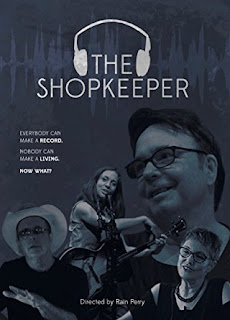 The Shopkeeper, a warm and thoughtful documentary from folk rock singer/songwriter Rain Perry, sheds an eye-opening light on the current state of the music industry.  With a focal point of Mark Hallman’s Congress House Studio in Austin, Texas, the film takes a close look at the what it has taken over the past few decades to stay in the music game.

Delving into Hallman’s career as a musician, which spans nearly forty years, we get a glimpse of his earlier years as a member of the band Navarro, which happened to lead to simultaneously backing two legendary greats, Carole King and Dan Fogelberg. In the Eighties, after relocating to Texas, Hallman rented a house on two acres of land south of Austin to use for a pre-production studio, and he just never abandoned it. Over the years, The Congress House has become a haven for musicians from both near and far away.  Perry brilliantly relays the tale of the ever evolving business of music through the stories of Hallman and those who have worked with him, like Ani DiFranco, Tom Russell, Charlie Faye, Betty Soo, and Colin Gilmore.

In 1974, the music industry boasted $10.5 billion in sales, which grew to $19 billion in 1994.  With the introduction of the MP3 and file-sharing services of Napster, Pandora, and Spotify, record sales have plummeted. This not only affects the artists, it affects the studios as well.  Without the promise of record sales, the artists embrace newer technology which gives them the ability to inexpensively record at home, on devices which may be nothing more than an iPhone.  There is a price to pay for this.  The music itself takes a huge hit in quality, as it bypasses the step where those with extremely trained ears can take a really good song, and make it a great song.  Hallman, who is one of those extremely trained and talented figures, is noticing the changing trends every day.

I love the stories Perry draws from the musicians who all share a love for this sacred space and who might consider the studio a second home. The comradery surrounding those tales of overcoming whatever obstacles they had to overcome are truly the heart and soul of the film.

For more information regarding this film, visit these websites...
rainperry.com and shopkeepermovie.com

Posted by PhillyCheezeBlues at 12:22 PM