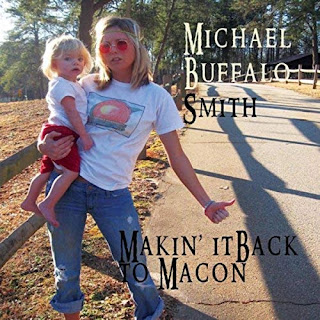 Makin’ it Back to Macon follows closely on the heels of his recent EP The Austin Sessions, released earlier this Spring.  The “Ambassador of Southern Rock” and founder of Kudzoo Magazine Michael Buffalo Smith reveals he has even more up his sleeve with this first full length album since 2005.  Buffalo holds down the vocals and acoustic guitar with the rest of the band being composed of Greg Yeary (rhythm/lead guitar) Billy Eli (acoustic guitar), Joey Parrish (bass), and Towson Engsburg (drums/percussion).  Paul Hornsby (Charlie Daniels, Marshall Tucker Band) produced the album, which also features Tommy Talton (Cowboy) on guitar, E.G. Kight on backing vocals, and the one and only Billy Bob Thornton narrating the prologue and epilogue.

For the introduction, Buffalo wrote a soulful dedication to the town of Macon, Georgia, making note to mention the music, the food, and the people.  Read by Thornton, this spoken piece is a wonderful tribute to set the table for the music which follows.

Buffalo brings a sense of optimism to his song of mortality in “Both Feet on the Ground” which features guitarist Daniel Jackson and bassist Joey Parrish, both from the Silver Travis Band.  Topped off with some very cool slide-work from Tommy Talton and featuring Paul Hornsby on the Wurlitzer piano, “My Baby Drives a Mercedes Benz” was  co-written with Smith’s longtime collaborator Greg Yeary.  Smith explains it was part of the set list when he and Yeary performed as Buffalo Hut Coalition in the Eighties.  Talton also appears on the fantastic and melancholy “Tired of Living Blues”.  Adding pops and scratches to be infused into the recording, Smith bestows a vintage sound to this bona fide blues tune.  Smith invokes a style reminiscent of the great John Prine into his music. A perfect example is “On a Still Cold Saturday” inspired by a trippy recurring dream.  Ripples of melancholy washes over when I hear Smith bare his soul on “Woman in the Moon (It Comes in Waves)”, a very personal song he wrote after the passing of the love of his life.

The record concludes with a beautifully written self-reflective spoken word piece, “Epilogue: Reflections at 60”.  With a gripping delivery, this mini-bio written by Smith is read aloud by Billy Bob Thornton.  It honestly ties everything together.

Posted by PhillyCheezeBlues at 8:58 PM