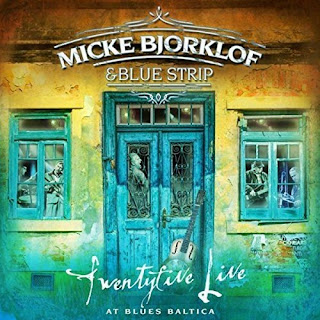 In 1991, front man Micke Bjorklof and bassist Seppo Nuolikoski formed Micke Bjorklof & Blue Strip.  With over twenty-five years under their belt, and a few personnel changes this Finnish outfit is now stronger than ever and holds court as a top tier blues band with a global fanbase.  Twentyfive Live at Blues Baltica celebrates those twenty-five years of playing live music with a magnificent twenty-one track double live album recorded at Blues Baltica, the annual four-day blues festival in Eutin, Germany.  Alongside Micke and Seppo, the lineup of the band consists of guitarist Ville “Lefty” Leppänen who has been with the band since 1999, drummer Teemu Vuorela, and percussionist/MalletKAT master Timo Roiko-Jokela.

Firing smoothly on all cylinders, the band nicely starts off with “Jack the Black Hat” from their 2014 studio album, After the Flood.  With a tremendous jazzy groove, they splendidly cover the sultry title track to that album as well.  I love the hoodoo inspired “Ray Needs a Mojo Hand”.  It captivates me with every listen.  A couple of very cool blues covers land on disc one too: “5-10-15 Hours”, originally recorded by Ruth Brown, and a ripping celebration of “Honey Hush” which is loaded with lots of hot juicy harp.  “Honey Hush” was originally recorded and co-written by Lowell Fulsom as “Talkin’ Woman”. The song was later covered by the blues-master Albert Collins who recorded it as “Honey Hush” to place on his 1978 LP Ice Pickin’.  Lefty gives a smokin’ guitar performance on this final song of the first disc.

The second disc opens with ”In Chains” a heart-wrenching blues ballad off Bjorklof’s 2015 studio album Ain’t Bad Yet.  “Gumbo Mama” is a fun and funky treat with a Red Hot Chili Peppers vibe.  Teemu nicely rolls the red carpet out for “Killer Woman” a twangy head-banger that rips it up in a classic rockabilly form.  It segues perfectly right into the next song, dedicated to the great, late Son House, “Ramblified” which is an incredible performance packed with lots of amazing slide guitar.  Twentyfive Live beautifully comes to a close with “Sweet Dream’s a Sweet Dream” a soulfully delicate tune which brings to mind the music of Tommy Bolin.

Until I actually get to experience a Micke Bjorklof & Blue Strip concert in person, I’m more than happy to have Twentyfive Live at Blues Baltica to enjoy.  It’s fabulous.

Follow the links below to read previous PhillyCheeze reviews for Micke Bjorklof and Blue Strip :

Posted by PhillyCheezeBlues at 4:15 PM