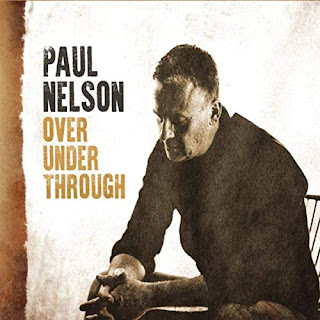 Over Under Through the new album from Paul Nelson is a powerful one to say the least.  His songs, poignant and masterfully crafted, are delivered with finesse.  Drawing inspiration from artists like Amos Lee, Ray Lamontagne, and Lyle Lovett, Nelson carves out his own style, and leaves me wanting to hear more.

Of the eleven tracks on the record, all are original with the exception of one.  That one exception is an amazing, retooled cover of Johnny Cash’s “I Walk the Line”.  He definitely made this one his own.   Nelson’s pulsing blues-laden spiritual, “Go Down Ezekiel” is terrific and swampy, with guitarist Kevin Barry (Rosanne Cash, Susan Tedeschi, Paula Cole) onboard.  The poetic dirge “Ghost in the Basement”, an absolute favorite, is beautifully written and sang with a heartfelt performance.  In “Silent Majority”, Nelson takes a Dylan-esque stance and boldly proclaims that silence strengthens authority, indifference paves the way, and ain’t nothing gonna ever change if we’re silent.  The song is loaded with a twangy goodness from Barry, and nicely accented with harmonizing backing vocals from Kristin Cifelli, Ellis Paul, and Nickie Fuller.

Paul Nelson scores huge with this recording.  Terrific from beginning to end, Over Under Through is a captivating and rewarding listen.

For more information about the artist, visit this website..   https://www.paulnelsonofficial.com

Click on the link below to purchase this terrific album from the PhillyCheeze Amazon store.
As an Amazon Associate I earn from qualifying purchases.

Posted by PhillyCheezeBlues at 2:35 PM