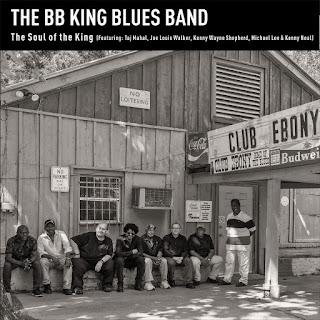 
Even though B.B. King has been gone for four years now, his spirit and legacy lives on.  His band of over 35 years The BB King Blues Band, with the support of several guest artists have created a wonderful blues album The Soul of the King.  The band is comprised of lead vocalist/bassist Russell Jackson, guitarist Wilbert Crosby, drummers Brandon Jackson and Herman Jackson, trumpeters James Boogaloo Bolden and Lamar Boulet, lead saxophonist Eric Demmer, saxophonist Walter King, keyboardist Darrell Lavigne, and trombonist Raymond Harris.


The energy of the big band is exquisitely captured on “Irene Irene”, an original tune featuring the great Kenny Wayne Shepherd on guitar.  This smoking blues track is heavily steeped in the B.B. King sound.  Hearing Mary Griffin and Taj Mahal pair up for a duet on “Paying the Cost to be the Boss” is indeed a special treat.  Joe Louis Walker makes an appearance to perform his song “Regal Blues (A Tribute to the King)”, making sure to throw in a sweet guitar solo.  For the grand finale, the band delivers B.B.’s signature song “The Thrill is Gone” with Michael Lee on lead vocals.  Lee, from Season 15 of The Voice, absolutely does this one right.  Other special guests on the album include, Kenny Neal, Diunna Greenleaf, and John Del Toro Richardson.


Soul of the King is an absolute gem and I highly recommend it for all blues fans.

Posted by PhillyCheezeBlues at 4:09 PM