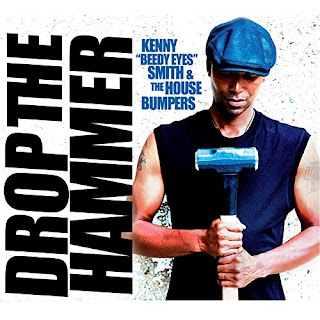 
The new disc, Drop the Hammer from Kenny “Beedy Eyes” Smith & the House Bumpers has really caught my attention.  The son of the late great Grammy Award-winning bluesman Willie “Big Eyes” Smith , Kenny grew up in the same Chicago house Muddy Waters once lived. With this new album Smith reserves a few songs to pay homage to traditional blues.  Then he steps out of the box and creates his own universe of sound as he explores the boundaries of contemporary blues.  Smith steers this ship from in-front of the mic and behind the drums.  The rest of his cutting-edge ensemble, The House Bumpers consists of Billy Flynn and Ari Seder on guitar, Omar Coleman on harmonica, Felton Crews on bass, and Luca Chiellini on piano.  Smith also enlists heavy-hitters Greg Guy (son of Buddy Guy), Sugar Blue, Greg Guy, and Nelson Strange, along with vocalists Kimberly Johnson, Dana Gordon, and Andrea Miologos.


“Head Pounder” kicks the album off with a slow-burning, multi-layered North Mississippi-esque rhythm.  It’s laced with blasts of harp, slide guitar, and the unique sound of sitar courtesy of Flynn.  Smith’s children, Mae, Clara, and Teddy contribute accompanying vocals to “Hey Daddy”, a happy and heartwarming original about parenthood.  Kenny drops a payload of deliciously-deep psychedelic funk on title-track “Drop the Hammer”.  The groove is so powerful, its hard to escape its gravitational force.  I also get immersed in the funky trance blues Smith and Guy create in “What in the World” with Seder, Crews and Chellini.  I love the way “Puppet on a String” opens from the kit.  This is another one that absolutely cooks, in a vintage Elvis “A Little Less Conversation” kind of way.  The enticing groove on “One Big Frown” sizzles with Strange on guitar.  Johnson’s powerful and soulful vocals take command.


Kenny Smith has certainly created a noteworthy album with Drop the Hammer.  It is one hundred percent fresh and baptized in the blues.


For more information about the artist, visit this website: https://beedyeyes.com

Posted by PhillyCheezeBlues at 5:36 PM