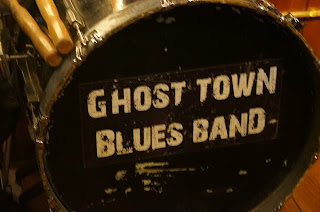 
This week, I had the honor of getting a sneak preview of the new and upcoming Ghost Town Blues Band album, tentatively titled Shine.  After hearing just a few of the songs, I am very eager to hear the album in its entirety once it is released.  “Shine”, which appeared on their live album Backstage Pass last year, now has a studio version.  I’m delighted the way this song embraces the Memphis sound as it does.  GTBB injects the spirit of the Allman Brothers into new tracks “Lying To Yourself Gypsy Queen”, and “Running Out of Time”.  They wonderfully sit in that Muscle Shoals pocket.  There’s an inescapable groove on “High Again” that takes a hold of me.  This one will definitely be a fan-favorite.  “Dirty”, a very cool track, filled with psychedelic Clapton-esque guitar licks, and funky fueled rap from Suavo, is another treat indeed.  I'm liking what I 've heard and have a feeling this album is going to be spectacular.

For more information about the artist, visit this website: www.ghosttownbluesband.com
Posted by PhillyCheezeBlues at 3:35 PM