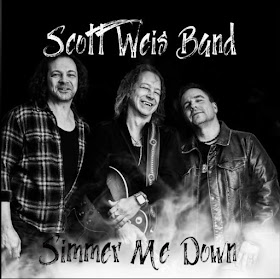 Simmer Me Down, the sixth release from Scott Weis Band, is a ten-track delight of electric blues.  With Weis on lead guitar and vocals, his trio also consists of Robert Kopec on bass guitar, and Roger Voss on drums.  Dedicated to the memory of Ben Elliot, who mixed and mastered the album, the record was recorded at Showplace Studios and features guests Cindy Mizelle on vocals, John Ginty on keys, Bashiri Johnson on percussion, and Phil Silverberg on keys.

The opening track “Pride and Soul”, delicately awakens to a hard-driving blues-rock gem.  Filled to the brim with the lush sound of keys and a crashing pulse, the song also contains a bodacious dose of slide guitar.  It’s a stellar way to get the album started.  Weis breaks out a little Cajun funk topped with side of harmonica on title track “Simmer Me Down”.  It’s such a fun listen.  Surrounded by a wonderful infectious rhythm, and accompanied by Mizelle on backing vocals, Weis sings “Helpless” with a soulful John Hiatt swagger.  The song is pure excellence.  Weis, Voss and Kopec absolutely rip it up on “Right Where It Belongs”.  This is blues-rock at its best.

Out of ten tracks on the recording, two are covers, and they are both terrific.  Weis performs Sam and Dave’s “When Something is Wrong with My Baby” with a mountain of heart and soul.  I love their take on ZZ Top’s “Jesus Just Left Chicago”.  Weis keeps this Texas blues favorite intact, while throwing his own spin into it.

The album closes with an amazing instrumental called “Transendence”.  It’s so reminiscent of the work of Tommy Bolin, it leaves me with a smile in my heart.  There’s no weak link in Simmer Me Down.  This album is about as solid as it gets.

For more information about the artist, visit this website : scottweisband.com