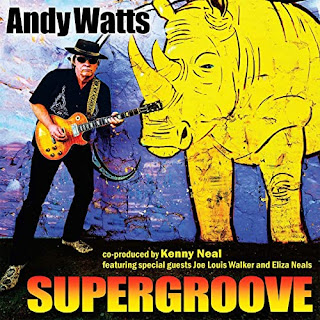 Supergroove, the latest album from Israel’s Ambassador of the Blues Andy Watts is an impeccable record of big-band blues topped with the delectable sound of Watts’ smoking guitar.  With vocals rotated around a noteworthy guest list of singers such as Eliza Neals, and Joe Louis Walker, the band consists of Eyal Klein on keys, Ioram Linker on sax, Gregory Rivkin on trumpet, Tom Mochiach on bass, Moran Bar-On on trombone, Tom Bolig on drums, and Coastin Hank on harmonica.  Co-produced by multi-BMA winner and Grammy nominee Kenny Neal, Supergroove is nice mix of originals and covers, with a clean and polished sound.

The funky instrumental “Supergroove” leads the recording off in a way which perfectly fits its name.  The sweet sound of horns backed with a B3 and a snappy back-beat make for great accompaniment to Watt’s Texas-blues stylings.  Linker’s baritone sax solo is a nice touch too.  I love Roy Young’s vocal stylings on their cover of Rick Estrin’s “Living Hand to Mouth”.  This is blues at its best with a luscious side of harp.  Young sounds great on the funky R&B cover of Gonzalez’s 1974 song “Pack it Up” too.  Grammy nominee Joe Louis Walker adds a silky-smooth touch to “Burning Deep”, a beautiful and soulful original.  It’s an absolute pleasure to hear the fabulous Detroit songstress Eliza Neals pour her magic on his 1995 song “Blues of the Month Club”.  I’d love to hear more collaborations between her and Watts.  High-energy blues-rocker “Don’t You Let Me Down” which was originally recorded in 1972 by the band Jericho, features the original singer Danny Shoshan.  This new version, rearranged for Watts’ larger band, sounds fantastic polished up with sounds of brass.  The album closes with a beautiful and delicate performance of Peter Green’s intoxicating instrumental “The Supernatural”.  Watts takes this song which first appeared on John Mayall and the Bluesbreakers’ A Hard Road album, and lifts it skyward in his own unique way.

Watts’ guitar mastery shines brightly on this album and he makes interesting choices music-wise.  Supergroove is a rock-solid album with rock-solid performances.  It’s definitely an album worthy of adding to your collection.

Click on the link below to purchase this terrific album from the PhillyCheeze Amazon Store.  As an Amazon Associate, I earn from qualifying purchases
Posted by PhillyCheezeBlues at 3:40 PM