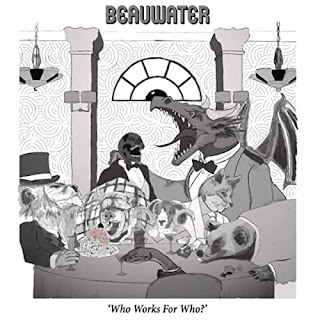 Formed in 2008, Beauwater got its start in St. Johns, NL.  Over the next nine years, this powerhouse trio accumulated five MusicNL Award Nominations and was awarded the 2017 ECMA for Blues Recording of the Year.  Produced by Chris Kirby, Who Works For Who is a splendid ten track album of blues-rock.  Guitarist/vocalist Jonathon Reid takes on the front-man role, with bassist Greg Newhook and drummer Mike Maddox comprising the rhythm section of this tight-as-hell outfit.  Also appearing on the album is Kelly Hoppe (Big Sugar) on harmonica, Terry Campbell on trumpet, Chris Harnett on Saxophone, and Chris Kirby on keys and slide guitar.

With Kirby on slide guitar, the album fiercely clocks-in on title-track “Who Works For Who?”.  This electric opener grabs me tight with its infectious hook, and sizzling guitar.  “Flavour of the Week” follows up and delivers a delicious plate of Texas-style blues.  I love the psyche-blues of “Tonight She’s Gonna Burn”.  Gently floating aloft on a bed of clouds, the song sporadically downpours furious guitar licks which saturate the soul.  The rolling blues riff on the front end of “Nodding Off” is a bit reminiscent to the North Mississippi sound.  Between that and Reid’s suave vocals, this one has me nestled in its clutches.  “Poison” is another one that has me totally under its spell.  This southern rocker is loaded with juicy harp and swirly organ with a killer rhythm backer.

Beauwater certainly caught my attention with this record.  Each song is masterfully crafted and played with precision.  Who Works For Who? is indeed an absolute gem.

Posted by PhillyCheezeBlues at 3:22 PM