#498 : Joecephus and the George Jonestown Massacre - Heirs of the Dog : A Tribute to Nazareth 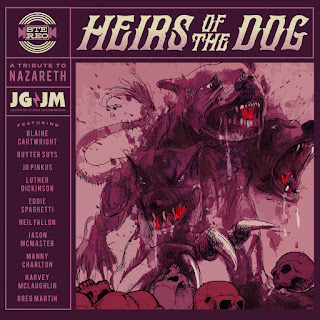 Memphis musician Joey Killingsworth and his band, The George Jonestown Massacre have returned to the studio once again to record a tribute album for charitable reasons.  The most recent was their Mutants of the Monster album honoring Black Oak Arkansas, which featured BOA founding members Jim Dandy and Rick Reynolds.  This time around, they’re paying homage to Nazareth, whose Hair of the Dog album still sits among the top of my favorite albums.  Killingsworth, aka Joecephus and the GJM bring their A-game as well as a fistful of notable guests to recreate the Hair of the Dog in its entirety, in an outlaw country punk fashion, and it sounds great.  Guests include Blaine Cartwright and Ruyter Suys (Nashville Pussy), Greg Martin (Kentucky Headhunters), Eddie Spaghetti (Supersuckers), Jason McMaster (Dangerous Toys, Igniter) and Manny Charlton (Nazareth, and producer of original album), JD Pinkus (Butthole Surfers), Luther Dickinson (North Mississippi Allstars), Neil Fallon (Clutch), and Harvey McLaughlin.

From the moment I heard the clang of the cowbells, on “Hair of the Dog”, I knew I was in for a treat.  With Blaine Cartwright involved on this one, the energy is kept at high voltage and segues brilliantly over to “Miss Misery” which is recorded with Greg Martin and Ruyter Suys.  It winds down with a delicious dose of feedback, making way for the iconic ballad “Love Hurts” which features both Eddie Spaghetti and Suys.  I love the inclusion of lap steel guitar on this one.  I never thought of the song as a country roadhouse slow-dancer, but it sounds amazingly good. Then “Changing Times” with Jason McMaster and Manny Charlton kicks in.  That riff takes ahold and digs tightly in, backed with a monster beat.  J.D. Pinkus and Luther Dickinson join the band for “Whiskey Drinkin’ Woman”.  Swampy and covered in kudzu, the song is an outstanding cover drenched in southern-rock.  About half the length of the original, “Please Don’t Judas Me” with Neil Fallon is a little less ethereal, and a little more ominous than the original.  Heavy bass, lingering guitar fuzz, small helpings of feedback, and a tambourine-fed pulse make for a cool-as-hell track.

From the viewpoint of a person who has owned the original Hair of the Dog album on vinyl for well over thirty-five years, Heirs of the Dog is an album I can enjoy as much as the original.  When it comes to making tribute albums, Killingsworth is a master.  This album stands entirely on its own, and is surely a record worth seeking out.

*      All JGJM profits from sales of this album and a portion of profits from sales from Saustex Records will be donated to FSHD Society for FSHD Muscular Dystrophy research in memory of the band’s friend Jonelle Spicer.  www.fshdsociety.org

For more information about the artist, or to purchase this album,  visit https://joecephus.bandcamp.com/

Posted by PhillyCheezeBlues at 2:48 PM