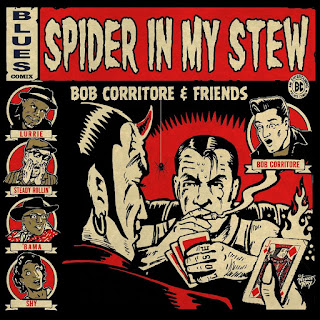 Taking into consideration all his own records in addition to all the others he’s played on, Bob Corritore has appeared on over a hundred albums in his career.  In that time, he’s acquired a hell of a lot of friends.  Thirty-eight of them appear on his new fourteen-track disc Spider in My Stew, making for one of the hottest straight-up blues albums this year.

he fabulous voice of Oscar Wilson (Cash Box Kings) takes command as he joins Tony Tomlinson (guitar), Patrick Skog (bass), and Alan West (drums) of the Fremonts to kick the album off with a swanky cover of Fenton Robinson’s 1957 single “Tennessee Woman”.   Shea Marshall’s contributions on piano and sax gives it the perfect finishing touch.  Sugarray Rayford, one of my favorite singers these past few years, belts out one of his own songs “Big Mama’s Soul Food, joined by Kid Ramos and Johnny Main on guitar.  This one has me jonesing for a meal at Miss Polly’s on Beale Street in Memphis.  The great Johnny Rawls lends himself and a song as well.  “Sleeping With the Blues” is smothered in his trademark style of soulful blues.  Bob Welsh on piano and John Primer on guitar and vocals rip it up on a splendid cover of the J.B. Lenoir song, “Mama Talk to Your Daughter”.  With Alabama Mike taking the mic, and Junior Watson (the Mighty Flyers, Canned Heat) on guitar, “Look Out” absolutely cooks.  I dig the groove.  The rhythm really takes a hold on this one.

I love the Willie Dixon tribute which packs three of his songs right in a row.  “Don’t Mess With the Messer” gets this batch started with Diunna Greenleaf on vocals and Jimi ‘Primetime’ Smith on guitar.  That is followed by title-track “Spider in My Stew” which hosts a dynamic duo of Lurrie Bell and Bob Margolin.  Corritore pours his soul into the song, as Bell and Margolin duke it out on guitar.  Bell takes the mic on this one, and it sounds great.  The Willie Dixon three-fer concludes with a rollicking standout recording of “Wang Dang Doodle” with Bill ‘Howl-N-MAdd’ Perry and his daughter Shy Perry.

For more information about the artist, visit this website : bobcorritore.com

ke a listen to the album on Apple Music.

Posted by PhillyCheezeBlues at 12:18 PM