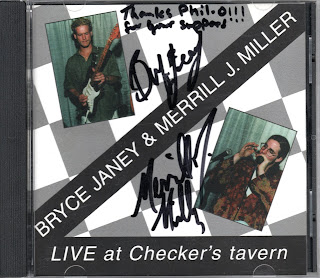 Twenty-five years ago, Iowa bluesmen Bryce Janey and Merrill J. Miller stepped onstage at Checker’s Tavern, in Cedar Rapids Iowa, and cut one hell of a live blues record.  Bryce, who had been playing guitar professionally since the age of thirteen with his parents as the The Janeys, has performed with acts such as Buddy Guy, Koko Taylor, and Johnny Winter.  Merrill, the son of a protestant minister, immersed in a background of gospel, infatuated with the blues, and notes his influences as Sonny Boy Williamson and Little Walter, has been playing harmonica since the age of 10.  The two have been friends since their school days together.

Live at Checker’s Tavern consists of fifteen deep-blues tracks.  It starts out with an acoustic blues original “I.O.U.” written by Bryce.  His deep vocals alongside Merrill’s rolling harp gets the album off to a brilliant start.  They keep it going as Merrill sings Little Walter’s “It Aint Right”, followed next by a brilliant take from the duo on Robert Johnson’s “Terraplane Blues”.  “Gamblin’ Man” is another great example of Bryce’s talent for songwriting.  This musical chemistry between the two shines on this song.  I really like the sliver of funk running through Howlin’ Wolf’s “Killing Floor”.  It’s loaded with hot electric guitar licks, and sounds great.  The funk gets even stronger when they break out “Practice What You Preach”, the title-track off Bryce’s first solo studio album. “Purple Haze” is a lot of fun as well and heats things up right before sliding into “Goin’ Back Home” a track written by Bryce’s father BillyLee Janey (Truth & Janey). This is Iowa-blues at its best.  The up-tempo harp-blues track from Merrill, “Slow Bluze”, absolutely cooks.  It’s cool to hear them belt out Sonny Boy Williams’ “Pontiac Blues” to bring the show to its end.

Checkers, known for its Sunday night blues shows, supports local and regional blues acts such as Bryce and Merrill.  I had the pleasure of seeing them perform there many times.  In 1997, the recording of this event was released and it has been a go-to cd for my listening pleasure for a long time.  Sunday, August 29th , from 4-7pm Checkers will host the 25th Anniversary of this recording featuring Bryce and Merrill playing selections from this CD as well as some of their original material.

Posted by PhillyCheezeBlues at 10:08 PM