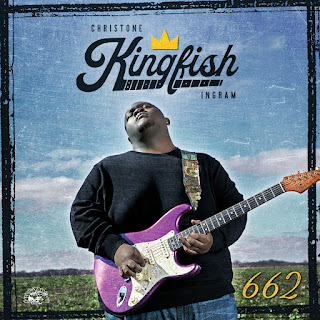 Clarksdale, Mississippi’s breakout blues star Christone “Kingfish” Ingram has just released his second studio album 662, and it’s fantastic.  It’s even stronger than his 2019 debut album Kingfish which entered the Billboard Blues charts at #1, remained in the charts for ninety-one weeks, and was nominated for a Grammy.  This recording has that same promise.  662, the album’s title refers to the area code in Mississippi where the twenty-two-year-old Kingfish was born and raised.  It’s truly the land many consider the ground zero or cradle of the blues.  And it’s within that magical place, Kingfish draws his inspiration.  662’s fourteen original tracks were cowritten by Kingfish and the album’s acclaimed producer/drummer Tom Hambridge.  Also appearing on the record are guitarists Kenny Greenberg and Bob Britt , bassists Glenn Worf and Tommy MacDonald,  pianist/organist Marty Sammon, saxophonist Max Abrams, and Julio Diaz on trumpet.

Fueled with a driving beat from Hambridge and his own blazing guitar mastery, Kingfish paints a lyrical picture of his home and family as he leads off with title-track “662”.  A pulsing rhythm and infectious riff pull me right in to “Long Distance Woman” where Kingfish’s guitar play is over-the-top fabulous.  “Not Gonna Lie” downright rocks on the riff, and is chockful of guitar ear-candy, and suave vocal stylings.  Loaded with a fistful of funk, Kingfish sings about the juke-joint experience which the older generation reminisced about in “Too Young to Remember”.  This one is another favorite.  I really like to hear him go into ‘crooner’ mode as he does on “You’re Already Gone”.  Reminiscent of those early days of Robert Cray, everything is just so perfectly smooth, from his guitar playing to Kingfish’s voice.  He tears the roof off with “My Bad”.  This song is so hot and smokin’, it absolutely cooks.  I simply adore “Something in the Dirt”, another homage to his home and the legendary bluesmen who played there.  It’s a great mix of barrel-house piano, paired with Kingfish’s instrumental finesse.  Beautifully performed, “Rock & Roll” softly and sweetly brings this stellar record to its close with a present-day twist on Robert Johnson’s visit to the crossroads.

662, the second album of hopefully many more to come in Christone “Kingfish” Ingram’s career, is an absolute gem.  I highly recommend this one for all music fans.

For more information about the artist, visit this website : www.christonekingfishingram.com

Posted by PhillyCheezeBlues at 1:04 PM