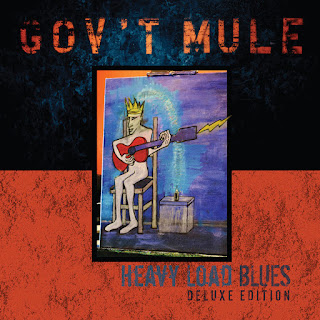 I’ve been a Gov’t Mule fan since seeing them live at the 1998 HORDE Festival at Alpine Valley in Wisconsin.  Warren Haynes is such an astonishing performer, and I consider him one of my favorites.  Heavy Load Blues, the title of the new Gov’t Mule album, is perfectly matched with the contents inside.  For the first time ever, the band has made an album comprised solely of blues, and it’s plumb terrific.  This thirteen-track release is also available as a deluxe edition which features eight additional songs, some recorded live and some in studio.

In a bodacious fashion, this record gets rolling with a cover of Leroy Carr’s “Blues Before Sunrise”.  Joined by the sounds of pounding piano keys and a fierce harmonica accompaniment from Hook Herrera, Haynes belts this one out of the park.  His vocals are surely meant for the blues, and he often reminds me of the great Howlin’ Wolf.  This is one of the reasons I am really drawn to the band’s take on Wolf’s classic “I Asked For Water (She Gave Me Gasoline)”.  I love the dirty, bass-laden, drum-crashing, organ-slathered groove which drives this one.  Their cover of Tom Waits’ “Make it Rain”, is a stand-out as well.  This version still maintains a tiny bit of that original industrial vibe, all-while flipping the song into a bona fide blues track.  Haynes’ guitar licks are hot and his voice is fearless on their performance of Albert King’s “Feel Like Breaking Up Somebody’s Home”.  This is one funky delicious treat indeed.

“Street Corner Talking”, the title track of a 1971 Savoy Brown release is dusted off and shined up for a riveting jam which only appears on the deluxe edition.  Also included as a bonus track is a smoldering performance of “Good Morning Little School Girl” by Sonny Boy Williamson I, with Hook Herrera guesting on harp.  It’s absolutely fabulous.

Heavy Load Blues is as good as it gets for blues albums, and I would definitely recommend the deluxe edition for anyone considering picking this one up.  It’s just that good.


For more information about the artist, visit this website : mule.net

Posted by PhillyCheezeBlues at 4:39 PM