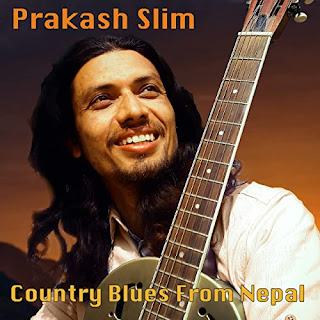 Ram Prakash Pokharel aka Prakash Slim, an emerging blues artist from Lamatar, in the Lalitpur district of Nepal, has most definitely caught my attention with his new album Country Blues From Nepal.  With only a resonator guitar and slide in hand, he captures the pure essence of the blues with magnificent covers of legends such as Robert Johnson, Bukka White, Charley Patton, Mississippi Fred McDowell, and Blind Blake.  The originals which appear on this thirteen-track album are beautifully performed as well.

An instrumental called “Blues Raga” starts the album off with lovely sitar-like bends and a hypnotic North Mississippi hill country groove.  Prakash’s original songs emit a vintage country blues essence as he sings them with a sincere delivery.  There’s an air of legitimate struggle in Prakash’s “Villager’s Blues”.  His hard-scrabble beginnings are laid out as he becomes the bluesman he is with the autobiographical song “Poor Boy”.  In addition, Prakash recorded a Nepali version of that song called “Garib Keto” which also appears on this album.  In this age of the Corona virus, it makes total sense there should be a straight up blues song on the topic.  The response Prakash has to the COVID-19 pandemic is brilliantly laid on the table with “Corona Blues”.

Prakash takes on two classic Robert Johnson tracks, “Crossroad Blues” and “Me and the Devil Blues”.  With an amazing fearlessness he digs in and performs the hell out of these songs.  His guitar prowess surely grabs the spotlight.  I absolutely love his cover of Fred McDowell’s “You Gotta Move” too.

Country Blues From Nepal is an utter gem of an album.  I’m excited to see the direction Prakash Slim takes with his music on his next release.


For more information about Prakash Slim, visit this website :  https://www.prakashslim.com/

Posted by PhillyCheezeBlues at 3:08 PM