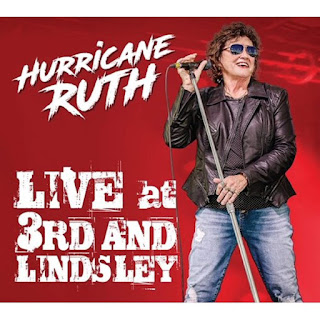 Live at 3rd and Lindsley, the sixth and most recent album from Ruth LaMaster aka Hurricane Ruth lands a ferocious punch with a fistful of raw, hearty blues.  This fourteen-track gem was recorded at 3rd and Lindsley in Nashville, Tennessee and produced by two-time Grammy winner Tom Hambridge.  It features Scott Holt and Nick Nguyen on guitar, Calvin Johnson on bass, Lewis Stephens on keys, with Hambridge also behind the drums.  Jimmy Hall makes a guest appearance on a couple of songs as well.

With a wall of rhythm, and searing guitar behind her, Hurricane Ruth leads the album off in a fierce way with “Roll Little Sister” which originally appeared on her 2012 release Power of the Blues ... Feels Like a Hurricane.  “Dirty Blues”, which was one of my favorites off her 2020 album Good Life, is hot and slathered with lots of swampy slide.  I love the cover of Peppermint Harris’ “As the Years Go Passing By” with Jimmy Hall’s fantabulous harp performance and accompanying vocals.   I can almost feel the magic which was happening onstage when this was recorded.  Hall shares his talent for one more song, “Make Love to Me”, originally on Hurricane Ruth’s Born on the River album.  This, paired with the prior song, makes for a nice scorching two-fer of red, hot blues.  LaMaster ends the show with a song she wrote for her mama, “Dance Dance Norma Jean”.  Holt injects a ZZ-Top-sized lightning bolt of electricity into this John Lee Hooker-inspired boogie for a jaw-dropping experience.  It absolutely cooks.

Hurricane Ruth’s Live at 3rd and Lindsley is as solid as they come for live blues albums.  It’s the real deal, that’s for sure.


For more information about Hurricane Ruth or to purchase music, visit the website :  https://www.hurricaneruth.com

This terrific album is available in the PhillyCheeze Amazon Store.   *As an Amazon Associate, I earn from qualifying purchases.

Posted by PhillyCheezeBlues at 3:12 PM