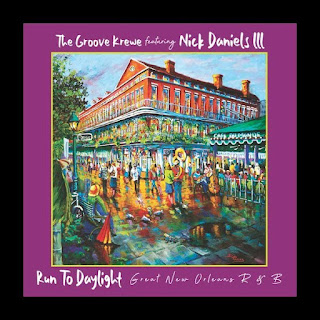 The Groove Krewe kicks things off in a delightfully funky way with title-track “Run to Daylight”.  The large band sounds lively and festive.  “That’s New Orleans” keeps the good times going in ‘Who-Dat’ fashion with shoutouts to Bourbon Street, Preservation Hall, and beignets.  There’s no doubt this is going to be a go-to album to spin this summer as the Krewe breaks into a chic Seventies-style disco groove on “Have a Party”.  It’s absolutely fabulous.  I love the album closer “Raising Cane on the Bayou”.  It hits the ground running in a surge of high-energy blues splashed with a bit of grease and topped with horns.  The Stax-meets-Muscle Shoals vibe on this one positively glistens.

Run to Daylight is a feel-good album with puts me in a happy mood.  This is just what I needed to hear.

Posted by PhillyCheezeBlues at 5:35 PM