Kent Burnside - My World is So Cold 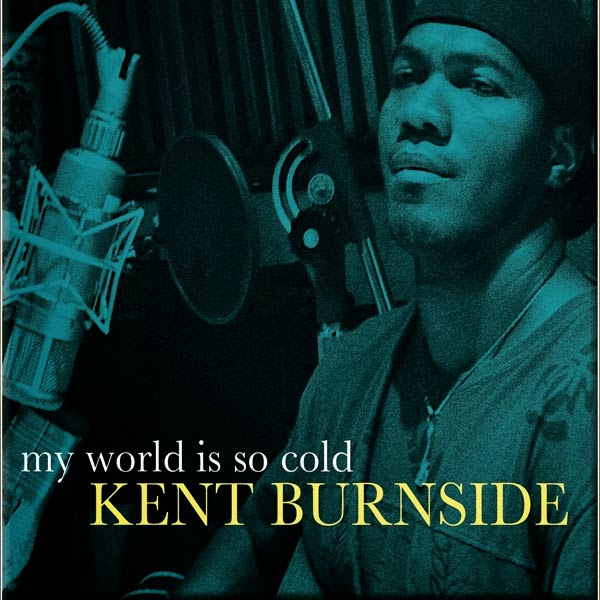 
After touring and playing with Jimbo Mathus for over a year, Kent Burnside (Grandson of R.L. Burnside) has decided to take the next step, form his own band, and introduce his own brand of Blues music, served up trance-style.  Thank goodness he did.  His debut album, My World is So Cold, is quite good.  Joining front man singer/guitarist Burnside in the studio is guitarist J.J. Holiday, keyboardist Eddie “Cheneddie” Baytos, bassist Justin Valdivia, and David Gray Kimbrough on drums and percussion.

A funky backing rhythm, along with Burnside’s raw vocals and slide guitar, make “Country Boy” a fun and interesting album opener. One of the more interesting selections is his cover of Willie Dixon’s “Spoonful”, first recorded by Howlin’ Wolf.  Burnside injects a bus load of soul into the song and does a tremendous job of tackling this one.  I love the way he sprinkles these little bluesy licks of psychedelia into the song, which sound like little globs of backwards masking.
Burnside brings it down to a sad slow sway with title track, “My World is So Cold”, about being tossed aside by his woman, and the hurt that goes along with being alone.  When this one plays, I just want to close my eyes, and listen.  I love the way it slowly builds to a climax bringing all the musicians together in a beautifully constructed jam.  Another slow and emotional song is “I Miss You”, written for his grandpa. The first half of the song is performed acoustically with the only sounds coming from Burnside and his guitar. Later,  the rest of the band join in, bringing a touch of electricity with them.  While on the subject of his grandfather, Burnside, again pays homage, playing R.L’s song “Miss Maybelle”.  You can hear the family trademark sound coming through on this one. Burnside tears it up on the guitar, and Baytos hammers the ivories in this powerful cover.
Like Sly Stone with a case of the blues, Burnside delivers a fantastic performance on “Walkin’ Blues”, the final track on My World is So Cold.  I love the funky guitar riffs, and the infectious rhythm. This track may be my favorite, but making that call was tough, as I found all the songs to be outstanding.  I really do look forward to hearing more from Kent Burnside.

Posted by PhillyCheezeBlues at 2:59 PM No comments: