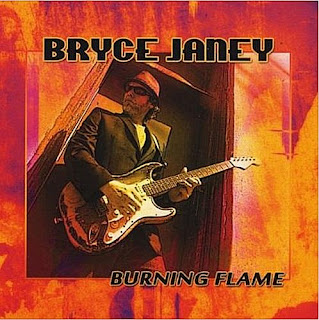 Bryce Janey’s newest CD, Burning Flame has been the only disc in my vehicle all week, and I haven’t had the urge to pop in a different disc yet.  That’s just how good this album is.  Chock full of Texas style blues, about motorcycles, guitars, bootleggers, and lost love, with a little swamp thrown in; this eleven track album features the Dan “DJ” Johnson on bass guitar, Eric Douglas on drums, and Tommy T-Bone Giblin on the Hammond organ.

Janey brings us in with a strong opener, “Chrome Horse”, a blues-ridden rocker, sure to be a favorite of motorcyclists everywhere.  When I hear this one, I think of how great it would be to hear it on the FX television show, Sons of Anarchy.

If you asked what songs really jump out, I would certainly include, the Jimi Hendrix influenced “Can You Feel It?”  Johnson’s killer bass line drives this one, while Janey lays down some smoking guitar licks.  “Guitar Playing Fool” is one I really feel.  Giblin’s Hammond shines through as Janey sings about making a living playing music.

There are a couple of covers on the album worth mentioning. The first is “Special Ryder Blues” by Skip James, which Janey has definitively made his own.  I love the bass line on this one, and overall this is one of my favorite cuts on the whole album.  The second cover, “The Stealer”, a Free cover originally recorded in 1970, which has a new more eerie swampy personality.  Another nice selection from the swamp is “The Last Goodbye”, and this is one I am instantly drawn to.  Janey lets loose and the guitar seems to play itself.   I really like this one a lot.
Janey has set the bar up another notch, one upping himself again.  Burning Flame is absolutely enjoyable from start to finish.  It is definitely worth exploring.
Posted by PhillyCheezeBlues at 9:28 PM No comments: 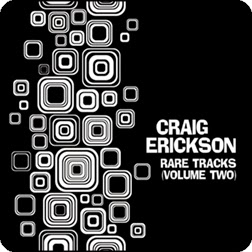 Craig Erickson never ceases to amaze me.  Rare Tracks (Volume Two), the second installment of previously unreleased nuggets from his secret stash, unleashes fourteen new pieces of ear-candy to be happily enjoyed. With the exception of one track, all are originals.  As well as writing, Erickson takes on the responsibility of playing all the instruments, and belting out all the vocals as well.  Erickson gives us a full one hundred percent.

Leading off with a short spacey track just over a minute long in length, ‘Deep Blue Circles’ seems to be more of an intro for the song following it, ‘Heavy Stuff’, about the necessity of having to escape everyday life once in a while.  This track has a nice little funky rhythm slathered with a thick coating of heavy fuzzy bass.

Few people can cover Jimi Hendrix, make it their own, and make it sound good to boot.  Erickson is one of those few.   Not quite a cover, but rather an adaptation, ‘Purple Haze (The Trip)’ is the only track not completely written by Erickson.  I love the subtle keyboard accompaniment on this, and how it sets a soft jazzy stage from which to launch an amazing crescendo of six-string energy.

The instrumental, ‘Make it Through’ is amazing and beautiful. I love how at ease and full of peace I am when listening to it.  Erickson’s expressiveness shines through brightly.  Erickson gets funky on ‘Midnight Flight (Reprise)’, a very short track clocking in at just over a minute and a half.  The only thing wrong with this track is that it is way too short.

I’ve listened to this album several times over and deem every track a keeper.  Rare Tracks (Volume Two) is a delight indeed

Posted by PhillyCheezeBlues at 6:52 PM No comments: 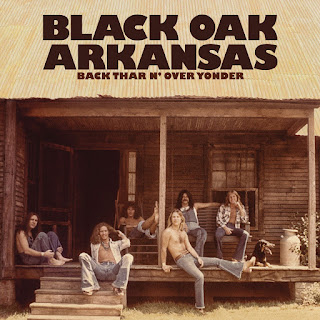 Being a BOA fan, I’ve been waiting for an album like this for a long time.  Back Thar N’ Over Yonder bestows upon us five new Southern Rock tracks featuring reunited former members of the band, jamming along side by side with the newer members. Returning to record alongside Jim “Dandy” Mangrum, Rickie Lee “Ricochet” Reynolds Johnnie Bolin and George Hughen are Pat “Dirty” Daugherty, and Jimmy “Soybean” Henderson.  And as info-mercial extraordinaire, Ron Popeil, would say, “wait… there’s more”.  There are also nine tracks of previously unreleased material from 1972 through 1974, a re-mastered version of the original version of “Jim Dandy”, and a thirty page booklet of classic band photos, concert posters, and promotional ads included to boot.  One of my favorite photos is from a concert poster showing the ‘Boss’, Bruce Springsteen opening for Black Oak Arkansas at the KSU Student Center Ballroom.   The ticket price was $4.00 in advance, and $4.50 at the door.

Coming out guns blazing, BOA hits us with “Plugged in and Wired”.  Bolin rolls us into the song with a catchy drum beat before the band breaks out into this heavy rock anthem.  This one gets the adrenalin flowing.  Immediately following is, “Sweet Delta Water”, an ode to the mighty Mississippi. With a much slower tempo, it takes a 180° turn from the preceding song.  I find myself reminiscing about older, simpler and more carefree times every time I hear it.

I love it when BOA gets a little philosophical and cosmic. “15 Million Light Years Away” taps into that philosophical well as Dandy ponders when, exactly, man will finally pull himself together.  In this crazy world, ‘lunatics run the asylum and animals run the zoo’.  But when we do all get ourselves together, he sings, ‘It may be tomorrow, it could be today, or 15 million light years away.’  I’m putting my money on 15 million light years away.  I also have to say kudos on the Reynolds penned track, “I Ain’t Poor”.  This country/rock boogie has a damn catchy rhythm and lyrics that make me smile.

The nine previously unreleased tracks are pure gold.  Produced by the legendary Tom Dowd, these were recorded with drummer Tommy Aldridge, guitarist Harvey Jett, and the late great Stanley Knight.  My favorite dusted-off original, “Legal I.D” is cool little country jam, complete with piano.  Preaching the message of checking gals’ ages before making any sort of advances, I can only guess R. Kelly never heard this one. The Tommy Aldridge drum solo on the trippy “Up Up Up”, is simply amazing.  The studio version of “Hot Rod” still smokes.  Duel guitars with Dandy’s raspy vocals which reach thresholds which would leave most people mute, make this a ribald psychedelic treat.

Hearing BOA cover the Rolling Stones’ “(I Can’t Get No) Satisfaction”, shot chills up and down my spine. Dandy pours a train car full of soul into his vocals on this one, and the band is tight as a tick. Turn up the volume on this one to fully enjoy.

This album is a fascinating simultaneous look into both the past and the present of Black Oak Arkansas.  When listening to the album, it does not feel like it is coming from two different sources in two different eras.  The weaving together of the vaulted tracks with the reunion tracks is, to say the least, organic and natural. I truly am surprised the unreleased tracks never made it onto vinyl back in the day.  They are superb and withstand the test of time.  And as far as the reunion material goes, it too puts a big ole grin on my face when I listen to it.

Posted by PhillyCheezeBlues at 11:03 AM No comments: 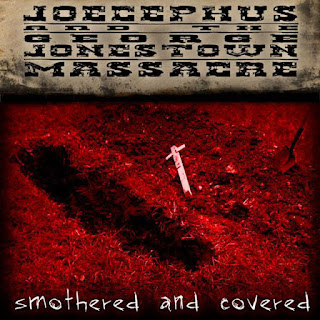 Ask, and ye shall receive.  Upon stumbling upon this bands’ Myspace page, my interest was piqued enough to add Smothered and Covered to my Christmas wish list.  Christmas morning arrived and I found myself sitting in front of the tree opening a small package containing that very same CD by Joecephus and the George Jonestown Massacre.  It made my day.  I am definitely a sucker for the non-mainstream.  And also a sucker for a title that also hints at one of the many ways one can get hash browns at one of my favorite chain restaurants, Waffle House: smothered with onions and covered with cheese.

Joecephus is Joe Killingsworth and is the brains, vocalist, and jack-of-all trades person behind this hellbilly/cowpunk crew.  The songs are way off-center and mostly about drinking.  The album kicks off with two energetic bluesy tracks,  “Jerk You Off My Mind” , about a man in prison who ended up there because he caught his wife messing around with another dude, and “Honky Tonk Night Time Man”.   One in particular I really enjoyed was “Bloody Mary Morning”, which boasted some mighty fine guitar playing.

Some of the other odd-ball, yet enjoyable songs of Smothered and Covered are “Drink Like a Fish”, and “Who’s Gonna Get us High?”.  The strangest, however, being a slowed-down version of AC/DC’s “Hells Bells”, which was recorded as a duet, and made clever use of the violin.   The song that almost got away, is an unlisted track at end of the CD.  This being, a cover of Jerry Reed’s “Amos Moses”, the man whose daddy used him for alligator bait and could eat his weight in groceries.

I really got a kick out of this CD, and look forward to hearing more music by Joecephus and the George Jonestown Massacre.
Posted by PhillyCheezeBlues at 3:12 PM No comments: