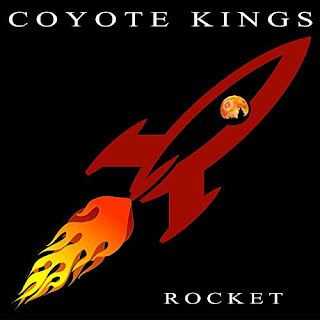 
Coyote Kings, that fiery blues band from Wala Wala, Washington which I’ve been reviewing since 2011, is back once again with yet another rockin’ album of blues.  The album is called Rocket, and it happens to be the Coyote Kings first on Tim Langford’s (Too Slim & the Taildraggers) music label Underword Records.  This is also their first album featuring their new singer, Tiphony Dames who recorded her debut self-titled album with the band in 2017.  Led by guitarist/vocalist/songwriter Robin Barrett, Coyote Kings is also comprised of bassist Kit Kuhlmann and drummer Gordon Townsend.


“Drive Me”, with its bluesy beatnik vibe scores huge, blending searing guitar licks from Barrett and Diego Romero with a fierce accompaniment from Nate Miller on sax.  Dame’s vocals are smooth as silk, and sound great.  Things get heavy with “Break Free” as Barrett throws down a riff that’s infectious and yet psychedelically ominous.  Miller shreds the sax again, as Barrett unleashes the funk in “All Tangled Up”.  The mood softens when Dame sings “Baby’s Gone”, a heartbreaking lament of lost love.  Her vocals really shine here.  The album comes to a close with a beautiful five-minute instrumental called “Song For Shaman”, featuring guest bassist Kelin Kreider. The track is absolutely stunning.

Rocket, the sixth album from the Coyote Kings is a positive step in a new direction for the band, and I look forward to hearing more from them with Tiphony.

For more information about the artist, visit this website.. coyotekings.com

Take a listen to the album on Apple Music, and if you decide to purchase it, use my special link.

Posted by PhillyCheezeBlues at 6:44 PM