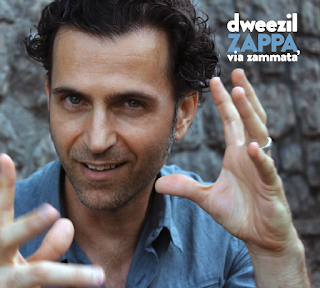 The title via zammata’ is taken from the name of the street in Partinico, Sicily where Dweezil’s grandfather, Francis Vincent Zappa lived before immigrating to America.  The street name refers to the very specific sound made when rain puddles are trampled by the feet of children at play.    In 2013, Partinico renamed that exact street, via Frank Zappa after Dweezil’s father.   Zappa hugs the curb, sticking close to this definition of via zammata’, in the music created for this album.  His playful splashes are in a musical playground, however, with focus on waves of sound instead of water.

Zappa starts the album with the fantastic instrumental, “Funky 15”.  Reminiscent of the attention-grabbing themes associated with television crime dramas from the Seventies, it boasts a nice slice of funk, a groovy bassline and a beautiful string and brass arrangement by ‘Scoremeister’ Kurt Morgan, which all culminates into a wonderful and thrilling listen.  “Rat Race”, lulls the listener in with a sweet little vocal harmony from the Song Birds, and then in a Reverend Horton Heat rockabilly fashion, pushes the pedal to the metal and takes off like a souped up hot rod.  A strong and steady flow of adrenaline keeps this one headed in a furious frenzy.  Zappa dives into the world of heavy metal on “Dragon Master” taking a tongue-in-cheek, over-the-top Spinal Tap approach.  Featuring lyrics written by Frank, and vocals by Shawn Albro, the song is a definite favorite.

Switching gears from metal to meta, Zappa enlisted the one and only John Malkovich to speak the whimsical wandering narrative on “Malcovich” to which Zappa returns in song, this reply, “Malcovich, Malcovich what the fuck are you talking about?”  This makes for a nice sing-a-long.  ”Hummin’” takes a realistic look at life with a weirdly hypnotic melody which burrows deep into my brain and digs in, as if to set up permanent residence.  I’ve caught myself waking up in the middle of the night a couple of times already with this song running through my head.

via zammata’ is a fun and quirky album with lush melodies and complex compositions built around bizarre yet intelligent lyrics.  It took only one listen to establish this album as a favorite.

Posted by PhillyCheezeBlues at 2:03 PM