Sam Morrow - There Is No Map 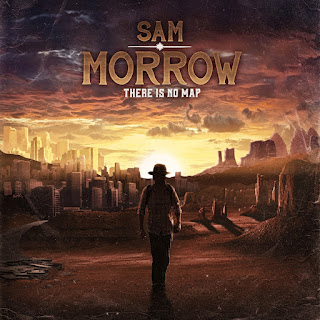 
Sam Morrow’s debut album Ephemeral was one of my favorites of 2014, therefore, I was most curious to hear the new songs on his latest release There Is No Map.  As expected, the new album revealed to be another masterpiece.  With poetic beauty and brutal honesty, Morrow explores the not-so-glamorous gonzo journeys his modern-day outlaw life has taken.

The soulful boogie-laced tale of destitution and addiction in “Barely Holding On” is a sure-fire hit.  Like a freight train, the songs keep fearlessly rolling.  I get goose bumps when I hear “The Deaf Conductor”, written by the album’s producer Eric Corne.  Accompanied by the lush and beautifully textured sounds of a B3, this one has an instant familiarity to it.  I feel as if I’ve heard this song a hundred times before.  Then there’s the swirling, melancholy, country-flavored dirge “Green”, in which Morrow, like a burdened Buddha sings “The same old bullshit don’t make the grass green.”  This one is flawlessly and soulfully performed.  The eerie and ominous vibe woven into the wonderfully dark “Devil’s in the Details” are quick to grab my attention as well. The song is short, but sweet.

With two strong albums like these under Morrow’s belt, I already await the next.

For more info about Sam Morrow, check out his website... http://sammorrowmusic.com/ 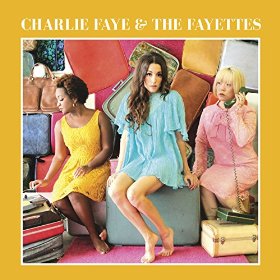 It’s about time someone took the bull by the horns to brush the dust off the classic girl group sound so embraced and adored in the Sixties.  Bringing that luscious sound to life again is Austin singer/songwriter Charlie Faye, who masterfully captures that carefree sound with eleven brand new original tracks.  Her backup singers, the Fayettes, BettySoo and Akina Adderley both have established and well-respected solo careers outside this charming trio.

Charlie Faye and the Fayettes start their debut album off with “Green Light”, a soulful and poppy feel-good treat about blossoming relationships. “Sweet Little Messages” walks the path between Motown and Memphis, dishing out beautiful harmonies peppered with Steve Cropper-like guitar licks.  There’s also a huge Stax sound on “Eastside” a lively dance-inducing track which draws attention to neighborhood gentrification.  This groovy track is definitely my favorite.

I love the combined sound of spaghetti-western surf guitar topped with the trippy psychedelic synth present on “Loving Names”.  It’s so hard to believe this is all brand new music.  When Faye sings “Coming Round the Bend” with her swirling and sugary sweet vocals, it sounds so good.  The song makes me feel nostalgic for the Phil Spector-produced Ronettes.

It’s refreshing to hear a brand new take on a sound that’s been out of the spotlight for nearly forty years.  I would definitely like to see music of this style make a comeback.  It has been put away for far too long.

Posted by PhillyCheezeBlues at 3:00 PM No comments: 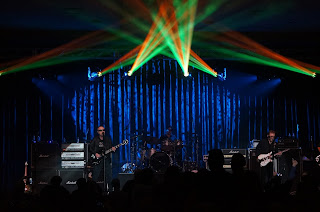 It was a great night for rock and roll as iconic rock legends Blue Oyster Cult and April Wine descended upon Riverside, Iowa to play a sold-out house at Riverside Casino.  Canadian rockers April Wine took the stage first, rolling the show out with “Anything You Want” off their 1982 Power Play album. The band is guitarist/vocalist Myles Goodwyn (the only remaining original member left), guitarist Brian Greenway (who has been with the band since 1977), bassist Richard Lanthier, and drummer Roy “Nip” Nichol.  After tearing through a very tight “Sign of the Gypsy Queen” and crowd favorite “Just Between You and Me”, they laid down the law with “21st Century Schizoid Man”.  It was heavy and delicious. Lanthier’s monster bass sounded so good alongside Myles Goodwyn’s mind-melting guitar.  Lanthier later delivered a killer bass solo on “Crash and Burn”.  Excitement filled the air as the opening riffs of “I Like to Rock” spill out.  Playing hard and heavy, the band was totally in sync and sounded very nice indeed.  Nichol peeled off a tremendous drum solo, part of which was barehanded.  It was quite impressive.  Winding things down, the guys played “Before the Dawn” and ended the show with “Roller”.  I loved the sound of the dual guitar on this one.  It was terrific.

Blue Öyster Cult hit the ground running with a fabulous convergence of guitars on “The Red and the Black”.  Their two original members, front man/lead vocalist/rhythm guitarist Eric Bloom, and guitarist Buck Dharma are joined by guitarist Richie Castellano, drummer Jules Radino, and bassist Kassim Sulton.  BOC delivered deeper cuts such as the medieval themed “Golden Age of Leather”, and the poppy “True Confessions” prior to cutting their way through a ripping and fantastically tight “Burning For You”.  From their self-titled 1972 album, we heard the hypnotically heady “Then Came the Last Days of May”.  The performance was mesmerizing and Dharma’s guitar was smoking.  Of course, no BOC concert would be complete without the rock and roll anthem “Godzilla”. Dharma played this iconic song with precision while Bloom’s vocals fell right into the pocket.  This was such a treat to hear. Without missing a beat, the set ended with a beautifully played “Don’t Fear the Reaper”, conjuring up memories of days gone by.  Just when the show was thought to be over, BOC returned for an encore, blessing the audience with one more song, “Cities on Flame With Rock and Roll”.  Sulton’s colossal bassline was played with true grit as this magnificent song and the evening ended with a barrage of guitar goodness.

Posted by PhillyCheezeBlues at 3:51 PM No comments: 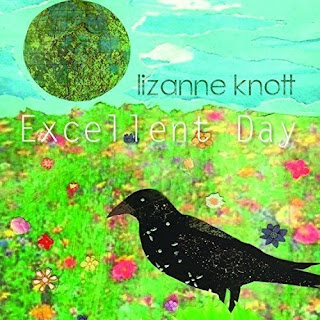 From the first listen of Lizanne Knott’s fourth and latest album, Excellent Day, I’ve been a little obsessed.  Knott’s lovely vocals beautifully accent her poignant and darkly-tinted lyrics with grace and precision.  Her music cleverly navigates the listener through a labyrinth built on rock and roll, folk and blues.

Ross Bellenoit’s haunting guitar licks and Erik Johnson’s determined driving beat create the alluring yet unsettling and ominous mood which is the constant throughout “I Come For the Kill”.  This song of unbridled passion sets the tone for the rest of the album.  “Lay My Burdon Down” is one hundred percent blues through and through.  I love the presence of Steve Martin on banjo and Tom Hampton on lap steel guitar.  That, combined with a little call and response vocals, exquisitely solidifies this as a favorite.

Things get sultry and spicy as Knotts sweetly sings the Bourbon Street-flavored tune “Not This Time”.  Trumpeter Stan Slotter steals a little bit of the spotlight on this track, which captures a fabulous performance by the band, made up of guitarist Kevin Hanson, upright bassist Ken Pendergast, pianist John Conohan , banjo player Glenn Barratt, Hampton on dobro and mandolin, and Johnson on drums.  The cover of the Gershwin penned “It Ain’t Necessarily So” from the folk opera Porgy and Bess, is a sheer delight.  Knott tackles “The Boss”, Bruce Springsteen as well, steering “Stolen Car” in more of a western and folky direction, making sure to keep the solemn texture of the original.

Title track “Excellent Day” is a charming jam-friendly tribute to Knott’s longtime friend, guitarist Jef Lee Johnson, who passed away in 2013.  Pendergast’s funky bassline and Bellenoit’s tasty guitar licks are front and center of this boogie-laced number penned by Johnson.

Sign me up for the fan club, as this is truly a fantastic album.


Posted by PhillyCheezeBlues at 2:09 PM No comments: 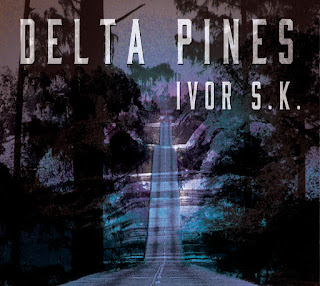 Engrossing lyrics and Ivor’s subtle guitar prowess on “Help Poor Me” pull me right into the album, and then the melodious and melancholy “Missus Green” carries me away.  Ivor’s raspy vocals are perfectly fitted for “I Like the Way”, a song that sounds at home in the Mississippi Delta.  Hearing the call-outs to Willie Dixon, Helena, King Biscuit, and Clarksdale on title track “Delta Pines” puts a big warm smile on my face. When it comes time to zone out and tune in, the go-to song is “Pelican”. This lush instrumental is absolutely beautiful.

Although Delta Pines is a fairly short album, don’t let the size fool you.  It is indeed a very sweet one.

Posted by PhillyCheezeBlues at 12:44 PM No comments: 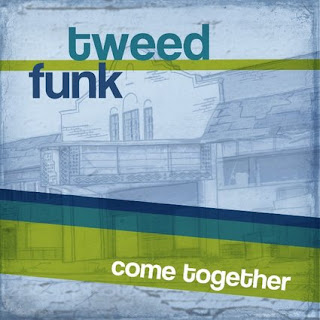 Give me some great tunes with a lot of soul and a fistful of funk, and I’ll be perched up in my cat-bird seat.  Spring will be ending soon, and I’ll be spending more time out on the deck jamming to a super-sized playlist built around the summer season.  Tweed Funk’s latest album, Come Together is surely on my list.  It has everything I like, including a smooth horn section and a retro-Sixties Memphis soul vibe.  This Milwaukee six-piece band is composed of lead singer Joseph “Smokey” Holman, guitarist JD Optekar, Eric Madunic on keys and bass, drummer Dave Schoepke, saxophonist Andrew Spadafora, and trumpeter Doug Woolverton.

“Light Up the Night” is an excellent high-energy number to kick the album off with.  It really gets the blood pumping, with its ear-catching bassline, and infectious groove.  By the time the fun and funky instrumental “Who is This” rolls through, I’m looking all around for my dancing shoes.  The same goes with the sensational “Love Ain’t Easy”.  This one tears the roof off in style and puts an enormous smile on my face with its bodacious bassline, and dazzling horns.

I just let the music soak in when I hear “Muse” and “Sweet Music” back to back.  Both are bathed in a delicious old-skool Stax soul sound, reminiscent of the Mar-Keys.  Optekar pours it on Steve Cropper-style, and of course, I can’t help but think of the Memphis Horns when Woolverton and Spadafora do their thing.  Holman’s silky and tender vocals bring great depth to the somber and beautifully written “Bullet”. It almost brings tears to my eyes.

Come Together has everything going for it.  Tweed Funk scores huge on this fantastic album.

Posted by PhillyCheezeBlues at 3:04 PM No comments: