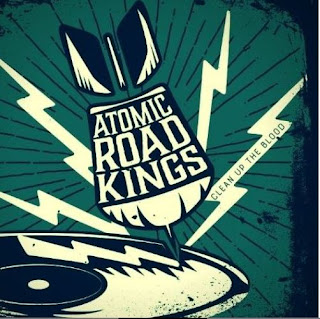 
At the core of the Atomic Road Kings sits vocalist/multi-instrumentalist ‘Big’ Jon Atkinson (Kim Wilson) and master harp player Eric ‘Jailhouse’ VonHerzen (Walter Trout, Social Distortion, Kid Ramos).  Together, with bassist Bill Stuve, drummer Malachi Johnson, and guitarists Scot Smart and Danny Michel, they bring a robust, vintage blues sound into the studio to create their debut album, Clean Up the Blood. The album contains eleven original songs, and one traditional cover.  Recorded live at Atkinson’s studio using vintage analog gear from the Forties and Fifties, the album has an authentic retro vibe to it and sounds terrific.


Stuve’s slow blues bassline and Atkinson’s commanding vocals make “Rumors” such a cool song.  Tony Delgado, on lead guitar, gives a smoking performance too.  I love “Vibrations” as well.  This throw-back with a Howlin’ Wolf vibe features a splendid accompaniment from pianist Robert Welch.  The ominous nature of title-track “Clean Up the Blood” digs deep to the bone.  Atkinson and VonHerzen are definitely at the top of their game when it comes to composing timeless-in-nature blues songs.  Von Herzen keeps the rhythm rolling on “Two Sided Story” with his magnificent harp playing.  More bluesy goodness ensues with “Back Down South”.


Atomic Road Kings is definitely a band for the blues enthusiasts to keep an eye on.  They are the real deal indeed.


Posted by PhillyCheezeBlues at 4:12 PM