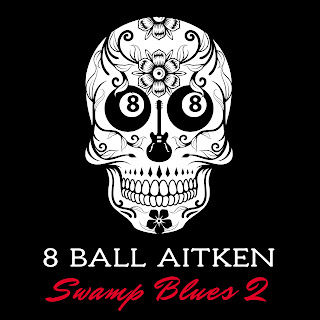 I knew I was in for a special listen once I heard the opening song “Tremolo Rain”.  With rich Dylan-esque lyrics, 8 Ball describes an assortment of characters from the Big Easy caught in a violent electrical storm.  His spacy guitar licks delightfully pepper an ominous circular rhythm.  Rolling in like a long-forgotten song from Dire Straits, “Murderers Bar” pays a wonderful homage to a once-popular hangout for blues aficionados at the Melbourne Hotel in Brisbane.  “Chocolate, Jack Daniels, and LSD” is plumb exquisite.  Lyrics which would put a grin on John Prine’s face are paired with a steady countryfied rhythm and sweet swirling sounds of organ.  Making a guest appearance on harmonica for “Cold Shower” is Mojo Webb.  Webb, a semi-finalist in the 2012 International Blues Challenge in Memphis, pours a heaping helping of deep blues in this ode to loneliness on the road.

With a candid and genuine approach, 8 Ball lyrically lays it on the line with every song.  Swamp Blues 2 is masterfully crafted, and indeed a wonderful listen.

For more information about the artist, visit this website : https://8ballaitken.com

Posted by PhillyCheezeBlues at 4:28 PM No comments: 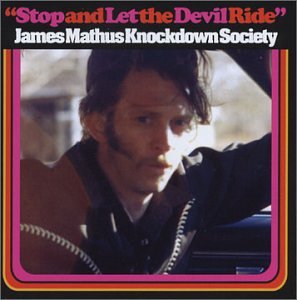 Jimbo Mathus is one of those artists I have the highest of respect for.  There’s absolutely no doubt in my mind, that his presence in the world of music has made a humongous impact.  On June 5, his entire back catalog was made available on Bandcamp by Big Legal Mess Records.  One of those recordings in particular, is a previous unreleased album called Stop and Let the Devil Ride.  The record dates back to 2001 and was recorded in the period of time he was working with Buddy Guy.  In 2003, there were few copies of the album printed, but not very many, and this never appeared online for purchase.  Self-produced, the album features Mathus on guitar and vocals, Stu Cole on bass, and Nate Stalfa on drums.  Additional guitars provided Dave Spencer and Luther Dickinson, and Patrick “Playboy” Smith appears on keys.

“Mean Old Line” is a welcoming ferocious rush of heavy electric blues.  Mathus keeps it nice and swampy while Stalfa keeps the beat intense.  His cover of J.J.Barmes’ “How Long” has a spectacular groovy rhythm and is performed with a raw unbridled approach.  The swirling sounds of keys from Smith, adds a warm intoxicating layer of sound to “Love I Miss Loving”.  Originally by Otis Rush, this one is remarkably resurrected by Mathus as an instrumental.  There’s an early Stones vibe on “Dope Sniffing Dog”.  Loaded with rocking guitar riffs, pounding keys, and a sing-a-long hook.  The song is indeed one of my favorites.  I also love the infectiousness of “Blues Jumped a Rabbit.  This blues-soaked delight puts a smile on my face with every listen.  Mathus masterfully delivers slow-cooked blues with a heart-broken abandonment on “Cheap Champagne”.  Staffa takes it to the next level with breakneck speed on title track, “Let the Devil Ride”.  Mathus rips it up with a searing delivery on slide guitar, and Cole absolute cooks on bass.  This one definitely gets the blood flowing.

Stop and Let the Devil Ride is extraordinary listen.  I’m so glad Jimbo decided to make this material available.  It deserves to be heard.

For more information about the artist, visit this website : therealjimbomathus.com 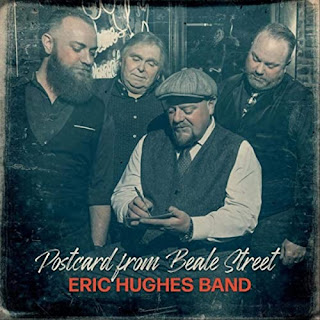 The first time I remember seeing Eric Hughes perform was in 2016 at Jerry Lawler’s Hall of Fame Bar & Grill on Beale Street in Memphis.  Lawler’s was having a soft grand opening and Beale Street was busy with festival-goers waiting for Memphis in May to commence.  Since then, I have made a point to catch him play whenever I am in the Bluff City.  I can usually find him playing at Rum Boogie Café or outdoors over at Central BBQ – Midtown during Sunday lunch.  His performances are engaging and his original songs are spectacular.  Postcard from Beale Street, the sixth release from the Eric Hughes Band, packs ten wonderful original songs spanning a diverse assembly of musical styles rooted in Americana and The Blues.  With Eric on vocals, harmonica, and guitar, the rest of the band consists of his brother Walter Hughes on guitar and backing vocals, bassist Leo Goff, and drummer Brian Aylor.  Also appearing on the album is Rick Steff on keys, Marc Franklin on trumpet, Kirk Smothers on saxophone, and Mick Kolassa on tussolin, spoons, and backing exclamations.

Leading the album off is a scrappy blues song called “Ain’t Whipped Yet”.  Walter’s guitar absolutely sings while Steff keeps it swinging on keys.  Hughes’ nostalgic ode to liquor “Oh Booze!” is simply marvelous.  The arrangement of the horns interestingly assists in capturing the essence of music from the early 20th century.  Walter breaks out some cool-as-hell Hendrix-like licks on “He’s Just an Alley Cat”.  This infectious blues-rocker is best heard at high volume.  I love “Follow Your Stupid Little Dreams”.  Not only is it a great mantra to live by, this delightful ditty keeps getting stuck in my head.

The rhythm section is revved and topped with hot blasts of horns in “Fair Weather Friends”.  This rocking upbeat track ironically exposes those who bail on us when the party ends.  It’s Hughes’ storytelling songs like “Blackberry Patch” which define his artistry as a songwriter.  The imagery embedded in the song invokes memories of playing alone outdoors as a child.  I love the use of the resonator guitar on this one.  The song is indeed a favorite.

Eric Hughes has honed his craft by logging over 4,000 live performances on Memphis’ historical Beale Street.  That’s a feat in and of itself.  The music from Postcard from Beale Street is definitely reflective of that, and is a refreshing change of pace to listen to.

For more information about the artist, visit this website : erichughesband.com

Posted by PhillyCheezeBlues at 4:55 PM No comments: 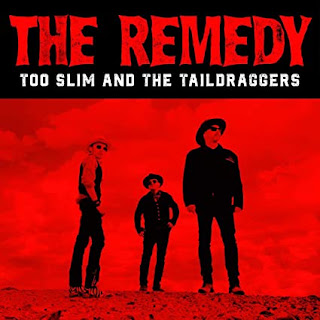 Tim Langford (aka Too Slim) has hit the studio once again with fellow Taildraggers Zach Kasik (bass, banjo, guitar, vocals) and Jeff “Shakey” Fowlkes (drums, percussion, vocals), returning with yet another outstanding album.  The Remedy is comprised of eleven songs.  Ten of those are originals with the writing evenly split between Langford and Kasik.  Recorded, engineered, and mixed by Kasik at his Wild Feather Recording studio in Nashville, the album features special guests Sheldon “Bent Reed” Ziro, Jason Ricci, and Richard “Rosy” Rosenblatt.

Too Slim tells the story of a volatile relationship in “Last Last Chance”, lacing the song with country-fried boogie and irresistible guitar licks.  Kasik takes the mic and steps into the spotlight on “She’s Got the Remedy”.  This killer song washes ashore with a steady hypnotic riff and a Pearl Jam vibe.  “Keep the Party Rolling” is plumb fantastic.  Langford rips it up on this phenomenal Texas-style blues anthem as Ziro belts smoldering blasts of harp.  Shakey holds nothing back as he hammers out a heavy tantalizing beat.  It sounds great.  Their cover of Elmore James’ “Sunnyland Train” is a delight to hear indeed.  Too Slim’s slide guitar is outstanding as usual.  In western gunslinger fashion, Kasik breaks out the banjo and spins a wonderfully ominous tale with “Sure Shot”.  It’s always a treat to hear Jason Ricci perform.  The harp licks he throws down on the “Platinum Junkie” hit with hat-dropping precision.  I love how this Kasik-penned song coolly walks the line between blues and funk.  In a provocative John Fogerty-style, Too Slim takes an up-close, hard look at the current political situation in “Think About That”.  Rosenblatt brings his harp for a guest appearance on this deliciously swampy song.

Too Slim and the Taildraggers remain one of my favorite bands as they continue to stay on point.  This new batch of songs in The Remedy is fresh, poignant, and fearlessly packed with that punch which Too Slim delivers oh so well.

For more information about the artist, visit this website :  tooslim.net

Posted by PhillyCheezeBlues at 4:10 PM No comments: