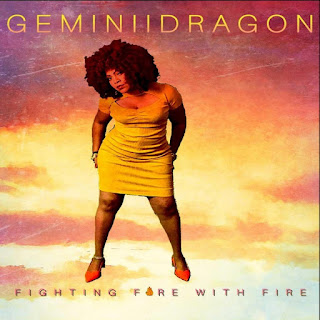 The bluesy hard-edged grooves and hearty power-filled vocals stand front-and-center on Fighting Fire With Fire, the latest release from Louisiana recording artist Jessica Harper aka GeminiiDragon.  Undoubtedly, that’s the winning combination which immediately drew my attention to this record.  This all-original album hosts eight splendid tracks co-written with producer/guitarist Christian Simeon.  With Harper behind the mic, and Simeon on guitar, the rest of the band is comprised of bassist Danny Woolen and drummer Kash Carlsson.

With an infectious rhythm running through it, title-track “Fighting Fire with Fire” kicks the album off with an Eighties-era vibe in a delicious musical cocktail of new-wave soul.  “Just the Way it is” leans in a little heavier as Simeon throws in harder, groovier riffs, and Harper demonstrates her vocal mastery and range.  “Huh Huh Huh” is a genuinely cool track too.  As Carlsson lays down a very danceable Seventies disco beat, GeminiiDragon channels her inner Tina Turner, with Simeon taking a more industrial approach on guitar.  It sounds great.  When it comes to straight-up blues, “Woman Scorned” is absolutely fabulous.  I love Harper’s little growls she peppers into the song.  Like those classic Led Zeppelin tracks we so adore, “Blacktop Good Man” rolls in like thunder before a storm.  GeminiiDragon’s fearless approach on vocals conjure a huge rock-star presence as Simeon is there to back her all the way on guitar.  It’s definitely an amazing song.  The comradery between Harper and the band shines bright on “Badder Than Eva” as they bring the album to its close.  The stripped-down instrumentation and the whisky-soaked vocal runs transport me right to the heart of the Mississippi delta.

Fighting Fire With Fire is one of those albums which captivated me at first listen, and kept me completely engaged until the end.  I’m looking forward already to GeminiiDragon’s next release.

Just the Way It Is  (Offical Video)

Posted by PhillyCheezeBlues at 5:46 PM