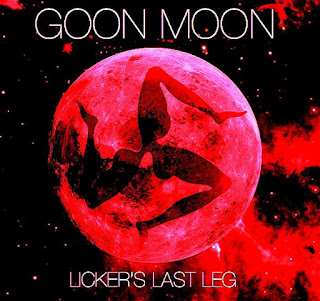 Jeordi White (aka Twiggy Ramirez of Marilyn Manson)  and Chris Goss (Masters of Reality) have collaborated once again to produce their first full length CD together as Goon Moon.  Licker’s Last Leg uses a variety of musical styles to walk the listener through the album.  Apple Pie, the first cut, almost scared me away from the CD with what I can only equate as the musical equivalence of running fingernails down a chalk board.  Eventually the annoyance stopped and the song unfolded, nicely I might add.  Although there is a lot of Goth rock influences in Apple Pie,  the rest of the CD seems to be a mix of classic rock peppered with a dab of industrial.   Tip Toe could easily have been mistaken for a Devo song, with its mechanical beat and quirky lyrics.    My Machine is another nice track,  it‘s a little faster than some of the other songs, and uses several tempos and synthesized vocals at times,  emitting an Eighties Techno/Metal flavor.  My favorite track though is An Autumn That Came Too Soon.  It has a simple beat but it is very hypnotizing, with its tranquil repetitiveness and smooth-as-silk vocals.  Individually these are all nice songs, but they don’t all necessarily all gel together as well as I would have expected.  What I considered the strangest and most experimental track, The Golden Ball, stretches to almost 10 minutes in length, and is composed of eight mini songs.  The last and least track, Built in a Bottle, could have been left off entirely and I would not have minded.  It was too slow and whispery to follow the eleven songs it followed.

Posted by PhillyCheezeBlues at 10:14 PM