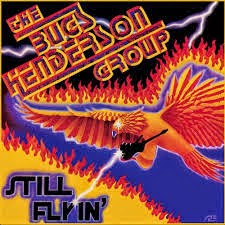 I’ve recently stumbled upon Grooveyard Record’s re-release of the late Texas blues guitarist/songwriter Bugs Henderson’s Still Flyin’ CD.  Although, the music is thirty-three years old now, it’s new to me, and frankly put, it’s a damn good album. In addition to the ten tracks on the original album, this reissue, also throws in an additional four bonus tracks, the last of which, happens to be Audio Liner Notes.  It's such a unique idea, and makes for an interesting listen as we hear the stories behind the music.  Rounding out the rest of the band is bassist Bobby Chitwood and drummer Ron Thompson.

“Baby Ruth”, a bluesy southern rock boogie, kicks the album off and draws me right in.  This is a fun one to listen to, and sounds like it was a fun one to record as well.  Henderson plays to an increasingly faster tempo, exhibiting some of his fabulous guitar-play.   Keeping the momentum going for a song appropriately named, “Heart Attack”, a rightfully impressive exhibition of fast-paced rockin’ blues, Henderson pulls out all the stops as Thompson pounds the hell out of his drums.

Henderson proves he can slow it down a bit too, and still sound great.  “Judi Likes the Blues” a song that sounds as if it were cross-pollination between Willie Nelson and the Allman Brothers, is a mellow and softly played country blues track, featuring the late and great Tom Morrell dishing out some tasty licks on his steel guitar.

I listen in awe to the killer blues riffs, in “Not Guilty”, title track “Still Flyin’”, and instrumental, “Little Brother”.  The latter is dedicated to Bug’s little brother, Kim who died in a car accident at the young age of Twenty-one.  Psychedelically played on top of a slow, yet funky rhythm, the emotion is felt with nearly every note.
Catching me somewhat by surprise, this album quickly became a favorite to listen to.  It’s an outstanding blend of guitar-centric Texas Blues and boogie-laced Southern Rock.

Posted by PhillyCheezeBlues at 6:23 PM