The Delta Flyers - Sixteen Bars : From the Archives #11 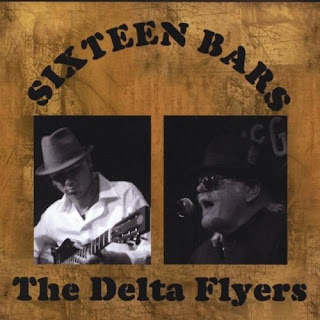 Vocalist Stevie DuPree and songwriter/guitarist Travis Stephenson are the driving force behind The Delta Flyers, a genuine down-home blues style band.   Sixteen Bars offers up ten top-notch original songs, covering the trials and tribulations of the common man and those a little less fortunate.

When one is confronted with  the term, ‘Sixteen Bars’, without taking too long to think about it, the sixteen bar blues easily comes to mind.  However. “Sixteen Bars”, the name of the title track is clearly a reference to the number of bars across a jail cell door.  This  track tells the crazy alcohol-fueled hard-luck story of the events leading up to a long prison sentence.   Played with lots of  twangy slide guitar and accompanied harmonica, this track is haunting and intriguing.

A little bit of a history lesson awaits those who listen to “Dockery Farm”, a dirge about the hard life as a poor share-cropper at the famous Dockery Farm cotton plantation outside Cleveland,  Mississippi.  According to B.B. King, this is where it all started.  Dockery Farm,  regarded as a birthplace of the American Blues, was added to the National Register of Historic Places in 2006.

Speaking of historical places, move over Bob Dylan, there‘s a new song about Highway 61.  I‘m talking about “61 Highway Blues“.  Again, there is likely to be some killin’ done too.  As Dupree puts it, ‘That old 61 highway sure can be a mean ole road.’.  Some great slide and some even  better story telling makes this a great song to start the album off with.

The cut that really got my attention on this album, was “Poison Took My Baby”.  Though it’s only a bit over two and a half minutes, this song takes a hard look at the damage drug and alcohol abuse wreak on a relationship.  As the song closes with , ‘Damn that whisky.  Damn that needle’, there is no mistaking what the message here is all about.

I thoroughly enjoyed this album.  The Delta Flyers prove to be a band to be reckoned with, and I anxiously await their next release..

Posted by PhillyCheezeBlues at 5:11 PM