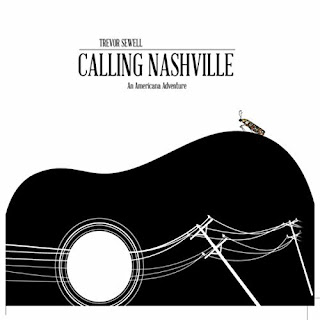 Soaking up the songs and sounds of UK bluesman Trevor Sewell’s latest album, Calling Nashville, makes for a wonderful listen.  Produced by Geoff Wilbourn and recorded at the Sound Emporium Studios in Nashville, Tennessee, this is his fifth record in as many years.  Sewell has definitely been at the top of his game during that time, logging in six American tours and pulling down seventeen international awards.  Eleven tracks of Blues and Americana excellence grace this album as does guest appearances from the legendary Janis Ian, and Tracy Nelson (Mother Earth).

Kellen Michael Weinrich throws down a dazzling fiddle performance on “Some Day”, a song dedicated to treating each other right.  Nicely topped off with a heaping dose of Sewell’s fiery guitar, the track makes for a great opener.  Sewell’s suave vocals are warmly accompanied by the beautiful voice and piano mastery of Janis Ian in the duet, “Fade to Grey”.   Ian also joins Sewell in another delightful collaboration in the elegant “Shadows”.  A hefty groove engineered by Sewell’s guitar prowess emits a bold Mark Knopfler vibe on the brilliant “Matter of Time”.  Tracy Nelson lends her graceful voice to the Dylan-esque ode to the heart-felt “Long Time Ago”.  The classic Nashville sound is genuinely embraced amid a turbo-charged cocktail of furious fiddling and searing guitar on “Stand Next to Him”.  It’s a killer song with truck-load of grit.

Calling Nashville is as solid as they come as far as albums go, grabbing my full attention with both the songwriting and the performances.


For more info on Trevor Sewell, check out his website : http://www.trevorsewell.com/

Posted by PhillyCheezeBlues at 2:43 PM