#334 : Too Slim and the Taildraggers - High Desert Heat 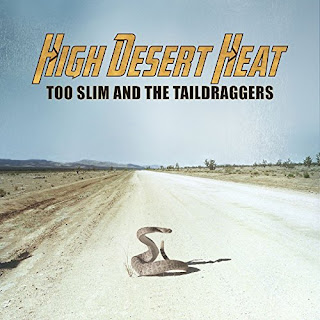 High Desert Heat, the latest release from Too Slim and the Taildraggers soars off the launchpad with a blazing psychedelic cover of the Chambers Brothers’ classic “Time Has Come Today”.  It’s magnificent to say the least.  Too Slim then proceeds to tear through nine ripping guitar-infused tracks of original blues-rock.  With Tim Langford aka “Too Slim” on guitar and lead vocals, the Taildraggers consists of Jeff “Shakey” Fowlkes on drums, Zach Kasik on bass guitar and special guest Sheldon “Bent Reed” Ziro on harmonica.

With Ziro supplying a hearty accompaniment on harp, Langford dispenses a big tasty dose of blues guitar on “Trouble”.  I love the groove Fowlkes and Kasik keep afloat.  They never leave the pocket.  Too Slim sings about hitting bottom in “Broken White Line”, a badass song with an opening riff sweetly reminiscent of Steppenwolf’s “Pusherman”.  It captures my attention immediately.   Communication breakdown is what “Stories to Tell” is all about.  This infectious rocker lures me in with its funky, searing riff, and keeps me hooked with Langford’s delightful guitar licks.  Too Slim and the Taildraggers close the album out with the title track “High Desert Heat”, a spaghetti western style instrumental with ominous overtones and exquisite slide guitar.

Too Slim absolutely nails it with High Desert Heat.  It’s a fantastic album.

Click below to read the PhillyCheeze review of : Too Slim and the Taildraggers – Blood Moon  https://phillycheezeblues.blogspot.com/2017/02/too-slim-and-taildraggers-blood-moon.html

Posted by PhillyCheezeBlues at 3:34 PM No comments: 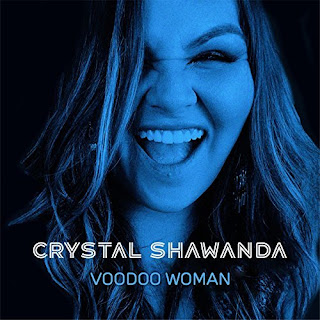 The latest release from Juno Award winning Crystal Shawanda is about as good as it gets.  Growing up in Ontario and introduced to the Blues by her brother at a young age, Shawanda has been playing paid gigs since the age of ten.  Voodoo Woman, her sixth album since 2008, is simply fabulous.  Of the ten tracks on this record, Shawanda delivers seven magnificent covers, and three outstanding original tracks of her own. Shawanda’s band is composed of Dewayne Strobel on all guitars, Dave Roe and Michael Dearing on bass guitars, Louis Windfield, and Darren James on drums and percussion, Stephen Hanner on harmonica, Dana Robbins on saxophone and Peter Keys on the B3 organ.

Shawanda takes on Willie Dixon and Howlin’ Wolf with a riveting two song medley of “Wang Dang Doodle / Smokestack Lightnin’”.  Strobel shines on slide guitar as Hanner wonderfully wails on harp.  It sounds great.  More power vocals follow on title track “Voodoo Woman”, a fitting homage to the late great Koko Taylor.  Shawanda brings it back on her beautiful cover of Etta James’ “I’d Rather Go Blind”.  I love this song, and this version sounds amazing.  I’m also head-over-heels for her cover of Bob Montgomery’s “Misty Blue”, which was also covered by Etta James in 2011 on her Dreamer album.  Robbins’ saxophone adds a lovely touch to the song.

“Cry Out For More”, an original co-written by guitarist Strobel is a smooth blues-rocker which comes to an end in full shin-dig form.  Shawanda’s vocals carry the perfect measure of rasp, reminiscent of the magnificent Bonnie Raitt.  Strobel conjures up a cool twangy groove accented by a suave horn accompaniment on “Trouble”, another one of Shawanda’s originals. With a tight band behind her, she approaches the mic with a fearless attitude.

Voodoo Woman is such a delightful listen; I give it my highest recommendation.

Posted by PhillyCheezeBlues at 1:40 PM No comments: 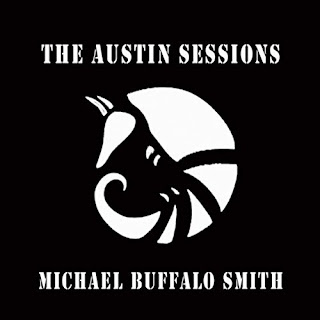 Between juggling his gigs as southern rock historian, author, creator/publisher of Kudzoo online magazine, blogger, podcaster, singer/songwriter/guitarist Michael Buffalo Smith has just released his sixth record since 1992.  The Austin Sessions, a four track EP recorded in 2016 at Green Garage Studio, is co-produced by Billy Eli and Jim Hemphill. With Smith on lead vocals and acoustic guitar, the remaining members of the band is composed of Jim Hemphill on lead guitar, Joseph Parrish on bass guitar, Michael McGeary (Jerry Jeff Walker) on drums, and Eli on backing vocals and acoustic guitar.

Smith opens up with a relaxed country ditty called “Paintin’ Her Toenails”.  This song according to Smith, was inspired while observing his wife sipping wine and painting her toenails on the front porch illuminated by the light of a harvest moon.  I can’t help but be reminded of the Boxmasters when I hear “Fatboy”, Smith’s southern rock homage to motorcycles and women.  Chockful of quick-witted double entendres, the song puts a grin on my face from ear to ear.  The pièce de résistance however is “Karl Childers Blues” a brilliant ode to Billy Bob Thornton’s Academy Award winning film, Slingblade.  Doyle Hargraves very much had it coming, indeed.

There's a full album from Buffalo coming around the bend, this summer called Makin' it Back to Macon, which is being produced by Paul Hornsby (Charlie Daniels Band, Marshall Tucker Band, Wet Willie).  So the four tracks on this EP will have to tide Buffalo's fans over until that is released.

For all things Michael Buffalo Smith, visit him online at http://www.michaelbuffalo.net.

Michael Buffalo Smith is also very much involved in spear-heading a campaign to establish the Southern Rock Hall of Fame and Museum.   For more information, visit the website, http://southernrockhall.org/

Posted by PhillyCheezeBlues at 5:02 PM No comments: