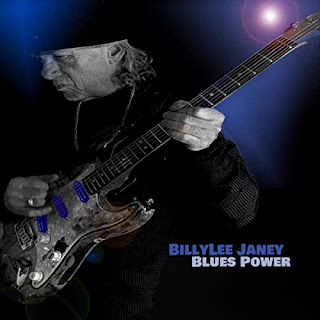 Since moving up here to Iowa in 1992, I’ve been listening to BillyLee Janey.  Inducted into the Iowa Rock and Roll Hall of Fame in 2005 for Truth & Janey and inducted into the Iowa Blues Hall of Fame in 2012, he is surely a force to be reckoned with when it comes to musicianship and playing the blues.  Blues Power, his latest release is a sheer delight.  Featuring eleven originals and two cover songs, this album is filled to the brim with hard-driving electric blues that cuts deep to the core.  BillyLee leads this trio on guitar and vocals.  His son Bryce Janey who also recorded, mastered and mixed the album, appears on bass guitar, with Eric Douglas is on drums.

From the first song, “Who Let the Dog Out”, Janey is already in top-gear, delivering hot-as-hell licks and playing the blues like I love to hear it.  He continues to amaze me in “Blues Alright”.  “Gimme Some Blues Power” is a monster of a song too.  Douglas lays down a stellar beat while Janey carpet bombs the listener with a tantalizing guitar performance.  His cover of Buddy Guy’s “Mary Had a Little Lamb” puts a big smile on my face too.  Janey makes this one his own.

While revisiting “Mean Ol’ Twister”, a track released on his album Got Them Iowa Blues, Janey adds an additional minute, forty-five seconds to the furious whirlwind simulation he creates with sound.  It was a spectacular song to begin with, but this new mix gives it the tornado-infused ending the song deserves.  Hearing Janey cut loose the way he does here, is an experience in and of itself.

For more information about the artist, visit this website.. www.billyleejaney.com


Posted by PhillyCheezeBlues at 3:39 PM