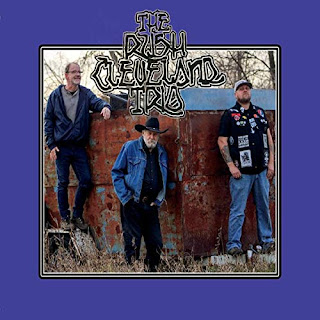 There’s something fascinating about the songs of Rush Cleveland.  His lyrical prowess goes toe-to-toe with the best of the best.  His music flows like aged whisky right from the cask.  This Iowa treasure ranks right up there with other favorite artists of mine like Watermelon Slim and Lucinda Williams.

The Rush Cleveland Trio is comprised of Rush Cleveland on vocals and guitar, Gordon Sankey on bass and vocals, and Will Quegg on drums, with guest vocalist Sophia Landis appearing on four tracks.  Their latest release Vintage Folk Rock and Blue Ribbon Blues is a stellar nineteen track album of hardscrabble folk rock songs and from-the-gut blues all written by Cleveland.

Cleveland opens the album in a rocking Neil Young fashion with “Waterloo Land” where a trip to jail always seems to be waiting just around the corner.  “River Flows”, another great rocker, reels me in with a killer riff, and a captivating beat.  Decorated with memories of being carefree and hanging out at the river, this is one of my favorite tracks.  It’s really touching to hear Rush’s personal reflections on “Jose’s Blues” a memorandum of his friend.  Pat Garret, Geronimo, and Billy the Kid vividly come to life in Cleveland’s western outlaw ballad “Rush Meets Billy the Kid”.

“He Always Comes Home”, featuring Landis on vocals, initiates the second half of the album.  I love the Chrissie Hynde/Pretenders vibe which radiates from her voice on this song.  Paradigms associated with contemporary love songs are abruptly demolished in “Crack House Row”, while blues paradigms are solidly reinforced with “Liquor, Lines, and Loose Women”.  Chicago, where blues meets electricity, is the backdrop of “Blues Electricity.  Here we get a brief history lesson of the genre and a terrific dose of raw guitar blues.  The album comes to a close with a wonderful instrumental called “Blues in D”.  It’s a track that puts me quickly at ease with every listen.

Vintage Folk Rock and Blue Ribbon Blues is bold stew of folk, blues, country and rock and is a standout slice of Americana.  I highly recommend it.

For more information about the artist, visit their Facebook page : https://www.facebook.com/TheRushClevelandTrio

Posted by PhillyCheezeBlues at 4:38 PM